Golf is a Great Game — For You

"The better question . . . is whether I have taken good enough advantage of the hours I have had in my life not playing golf." — Frank Deford

In reading Frank Deford’s wonderful 2012 memoir (Over Time), I discovered a second similarity I share with the gold standard for modern sportswriting. In addition to us both being Frank III, neither Deford nor I partake of that most common of sporting endeavors for men beyond their team-sport primes: golf. This being Masters week, the time seems right for some self-reflection on why, exactly, a grand old game popular beyond measure worldwide has not found its way into my activity schedule. I’ll be glued to the set Sunday afternoon, but with one more day of dust collecting on my own clubs.

I’ve actually had a few memorable days on the links — in part for the small selection size — so I’ll share three:

• Near the end of my senior year in high school, our class spent a day at a resort on Lake Morey, near the Vermont/New Hampshire border. Fueled by fire water hidden in each of our bags, four of us toured the Lake Morey course as best we could. I remember that time mostly for a complete void of worries. Final exams taken, college entry secured. Think I’m going to fret over that hook off the ninth tee?

• Four years later, having decided to return south after nine years in New England, I spent my last full day in Vermont playing golf with my dad. Dad was a member at the small club in my hometown of Northfield. No fire water in my bag this time and my swing was as disjointed as the company was pleasant. It didn’t matter, of course. The longer-than-necessary walk did.

• In 2009, six high school friends and I gathered in Myrtle Beach to collectively celebrate our 40th birthdays. To prepare for the trip, I retrieved my clubs from the attic and spent a few days shaking the rust off my swing. Until my back locked up with spasms, and for the better part of a week. I recovered just enough to be a designated putter in my foursome, which included one of my classmates’ dad (that’s me on the far right of the picture). I learned the skill of how and when to wave down a beer truck, and took the message (from my body) loud and clear. Playing golf has its rewards, tangible and otherwise. Practicing golf causes injury.

Having grown up playing team sports (I played three in high school), golf has always seemed lonely to me. I know this perception is absurd. The best stories are told and the most lucrative business deals are struck on the golf course. Better yet, many golfers actively choose this brand of loneliness, to play a round and escape all the worries that gather after that last week in high school. My dad was also a fly fisherman. (Didn’t inherit that gene either.) The quiet, contemplative qualities fishermen adore can be found on fairways and greens, too.

But I guess I’ve never stopped missing my teammates, and the sense that every win (or even loss) was ours. A couple of strikeouts meant nothing if our team prevailed in a baseball game. And putting up double figures on the scoreboard means less than nothing if our basketball team didn’t win. I’ve never approached that sense of communal achievement with a golf club in my hand.

Another element that has kept me from becoming a regular on the golf course: the choices. All the damn choices. Which club? Fade? Lay up? Over the water? Left of the bunker? Sports, for me, have always been about instinctive thought. There is a purity to decision-making when you see a curve ball that may or may not break into the strike zone. Exhausted in the fourth quarter, there is no decision whatsoever to that free throw you’ve been granted: just make it. I’m now paid to make decisions, large and small, to help a magazine reach mail boxes every month. I don’t want the labor of such mental exercise in my leisure time.

All this said, I love golf. I love the drama of Sunday at a major. (“Drama” is an overused sportswriter’s term, but it absolutely applies four Sundays a year.) I love how seriously golfers — from Rory McIlroy to my high-school buddies — take their swings, and how the suggestion that said swing could use some help is akin to calling a woman ugly to her face. And I love golf because my dad loved golf. I love the peace Dad found on rare occasions when every ball he struck flew straight. 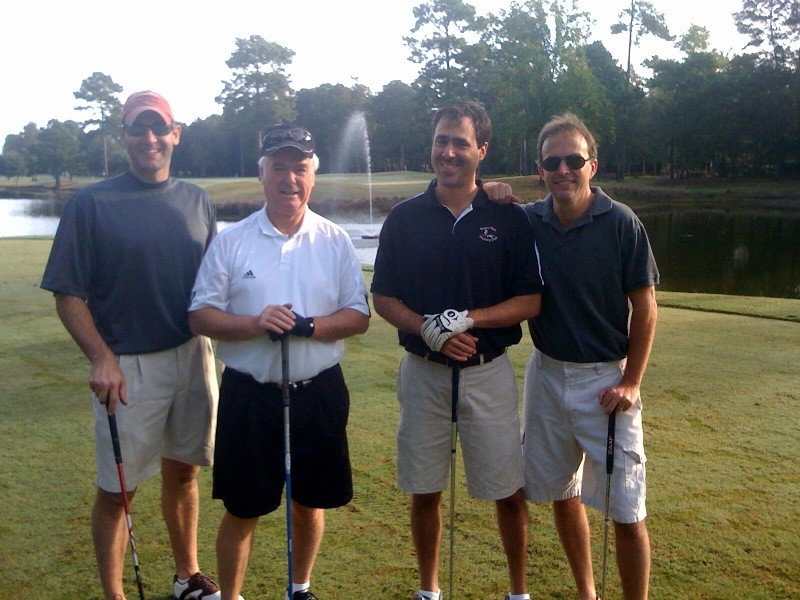 Considering the number of baseball games I enjoy every year — at the park, on TV or radio — I’d have a hard time convincing the leisure gods (to say nothing of my wife) that three-to-six (more?) hours a week on the golf course would comfortably fit my schedule as a husband, father, and wage-earner. So for now, I’m counting those days and nights at the ballpark as time well spent while not playing golf. At least until one of my daughters picks up a club. But next time ... no practice swings.

Golf is hard Golf is not for me watching golf