Remember Boston, But Embrace the Crowd

October 2001 was going to be a special month for my family. A longtime friend — a high school classmate — was getting married in Vermont. Autumn in the Green Mountain State, of course, is a time when the colors of those mountains transform from green to a spectrum of shades that would drop Monet’s jaw. My wife and I found ourselves counting down the weeks to our trip, the chance to catch up with old friends and show off our 2-year-old daughter. 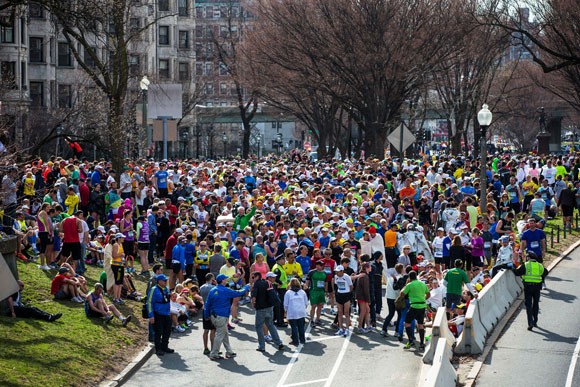 Then 19 lunatics turned four passenger planes into weapons of mass destruction, changing the world for good. On the morning of September 11 — merely a month before Doug’s wedding — two of those planes took off from Logan Airport in Boston, the very place we’d be landing on our trip north. It was only a few days before passenger flights were again in the air, but it would be a long time before anyone buckled their seat on an airplane without a fear they didn’t know on September 10th. My wife and I had a conversation near the end of September in which she said she simply didn’t want to expose her child to that kind of danger. And I listened to her case. For the first time as parents, we were scared.

With a week, now, to process the murderous attack at the Boston Marathon, I’m no closer to understanding the act than I was (or am) the slaughter of 9-11 twelve years ago. A part of me is scared, particularly the father in me. Alas, one emotion I didn’t feel last Monday was shock. As stunning as the news was, as graphic as the scene on Boylston Street may have been, the horror entered my thought pattern much easier than did the 9-11 attacks. Just as every act of terror has since the first plane hit the World Trade Center. That, friends, is what scares me the most: the all-too-common quality of modern carnage.

How do we “process” atrocities like 9-11, Newtown, or the Boston Marathon attack? (There really is no formula, no process, thus the quote marks.) How do we explain to our children and steer them toward adulthood with the eagerness and optimism that should trump fear and apprehension? I don’t have the answer, and I won’t anytime soon. But I do have the image (at least in my mind). It’s that crowd — that tremendous crowd of decent, happy, energetic, thriving human beings — lining the marathon route in Beantown last week. It’s an overstuffed crowd of basketball fans in a football stadium in Atlanta, cheering the best college basketball championship of the century. It’s a crowd of excited Grizzlies fans packing FedExForum for a playoff game . . . and the eagerness and optimism accompanying every ticket-holder to his or her seat.

With apologies to the agoraphobic — it’s a legitimate ailment, and one I find myself wrestling on, say, a New York City subway — gathering is to the human soul as water is to the human body. Whether it’s church on Sunday, lunch on Monday, or a 50,000-seat stadium for the next big game, we participate together because our favorite moments gain value as we share them with family and friends (including the “friends” we may not know . . . those wearing the same Grit & Grind t-shirt we’ve worn out).

Sadly, monsters among us recognize our urge to gather. Part of their cowardice is the attempt to do as much damage with as little effort as possible. The result, as we too often see, is quite literally blood in the streets.

One of the victims who died last Monday was Krystle Campbell, a 29-year-old restaurant manager from Medford, Massachusetts, the town where my alma mater — Tufts University — has sat on a drumlin for more than 150 years. I didn’t know Krystle, but I sure know her world, just as so many of us know Boston, or know friends in or near Boston. They don’t call it the Hub for nothing. For me, reading about Krystle Campbell has been the hardest part of “processing” this tragedy. And hers is the face I see when I resolve to make sure her killers’ objective is not achieved. (Sean Collier, the police officer killed last Thursday by the bombing suspects, was from Somerville, a town adjacent to Medford.)

Back to the fall of 2001. My family took our flight to Boston. We made it to Doug’s wedding, and have memories of that weekend we’ll carry with us the rest of our lives. There wasn’t a person at Doug’s reception not hurting from the recent attacks on an innocence America can never know again. But gathering for that life-changing event filled every one of us with, yes, eagerness and optimism for the future.

So plan on attending the next sporting event on your calendar. And the bigger the crowd, the better. I’m already brainstorming ways I can be in Boston for Patriots’ Day in the near future. I may not run the marathon, but it’s been too long since I’ve sat in the bleachers at Fenway Park. With a crowd. With my friends.