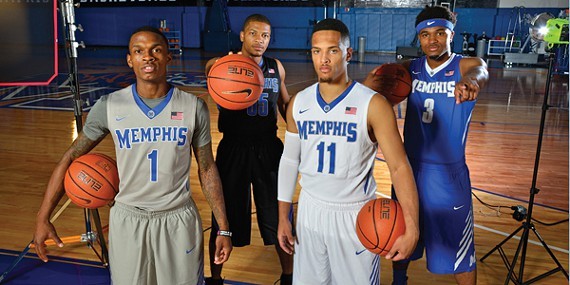 Guts. Backbone. Heart. In winning at Louisville and Temple within a span of 48 hours last week, the Memphis Tigers displayed all the anatomical metaphors we’ve come to identify teams willing and able to overcome adversity. The community mood here in Memphis following the Tigers’ ugly home loss to Cincinnati on January 4th suggested this team might not be capable of winning games in an even-numbered calendar year.

Then Louisville happened, a comeback over the game’s last four minutes few Tiger fans will forget this calendar year and beyond. And Temple happened, a 10-point victory that was much more nail-biter than blowout for the first 30 minutes of the game. Now the Tigers will enjoy the luxury of a four-game homestand to build upon two wins that have changed the tone of the 2013-14 season.

Looking at the four-game gauntlet the Tigers faced to open the new year — Cincinnati, Louisville, Temple, and Connecticut — I felt a split (two wins) would secure a spot in the Top 20 and allow the team to battle for a top-five seed in the NCAA tournament. Now, Josh Pastner’s squad has an opportunity to take three of four in this arduous segment of the schedule. A win over UConn at FedExForum Thursday night could take this team closer to the Top 10 than anyone would have believed possible after the Cincinnati game. With the team having been away almost two weeks, you have to believe the arena at Third and Beale will be ready to burst.

• It was troubling to see former Tiger great DeAngelo Williams get only five carries in the Carolina Panthers’ loss to San Francisco Sunday in the NFL playoffs. It was particularly disheartening to see the Panthers’ run the ball three times inside the 49ers’ five-yard-line midway through the first half, with none of the carries by the franchise’s all-time rushing leader. Curious management of a roster by Panther coach Ron Rivera.

On the other hand, New England Patriots kicker Stephen Gostkowski — a classmate of Williams at the University of Memphis — will play in his fifth AFC Championship this Sunday when the Pats travel to Denver. Gostkowski has led the NFL in scoring each of the last two years (158 points this season). With 1,023 career points, he is 135 points shy of Adam Vinatieri’s franchise record and just nine points from entering the NFL’s top 50 for career scoring. Incidentally, Gostkowski holds the U of M scoring record with 369 points over his four years as a Tiger. Number two on that chart? DeAngelo Williams with 362.

• Sunday is my favorite football day of the season, college or pro: a double-header of NFL conference championships to decide this year’s Super Bowl combatants. Football fans need to enjoy every minute of the latest tilt between Denver’s Peyton Manning and New England’s Tom Brady. The two legends — each among the five greatest players ever to take a snap — have met twice before with a Super Bowl berth on the line, Brady and the Patriots winning after the 2003 season, Manning and the Indianapolis Colts following the 2006 campaign. This is a modern Ali-Frazier in shoulder pads and helmets. The best professional football can offer. My pick: Broncos 34, Patriots 24.

As for the NFC, I have family in Seattle, creating rooting interest by default. But the Seahawks are going to have to score some points to beat the 49ers, a team flexing with offensive weapons to support quarterback Colin Kaepernick: running back Frank Gore, wideout Anquan Boldin, and tight end Vernon Davis. Seattle enjoys a home-field advantage unlike many in the NFL. My pick: Seahawks 23, 49ers 20.

• The 60 Minutes report on Alex Rodriguez (and his alleged doping) that aired Sunday night was nothing short of chilling. Tony Bosch — founder of the now-infamous Biogenesis clinic — claims he prescribed Rodriguez a cocktail of performance-enhancers. Arod’s attorney, of course, denies it all. But now we learn of allegations that “an associate of Alex Rodriguez” threatened Bosch’s life

Over the course of the lengthy “steroid era” in baseball, the one word we haven’t heard used — until Sunday night — is murder. But think about this story. Sandwich a person willing to break the law (Bosch) between two parties as financially powerful as Major League Baseball and Alex Rodriguez, and you have the potential for a Sunday-night movie script. MLB has gone so far as to pay for Bosch’s security. This is so ugly, so broken, so open a wound for the national pastime. It’s hard to envision Rodriguez ever entering a major-league batter’s box again. But mark this down: he will.