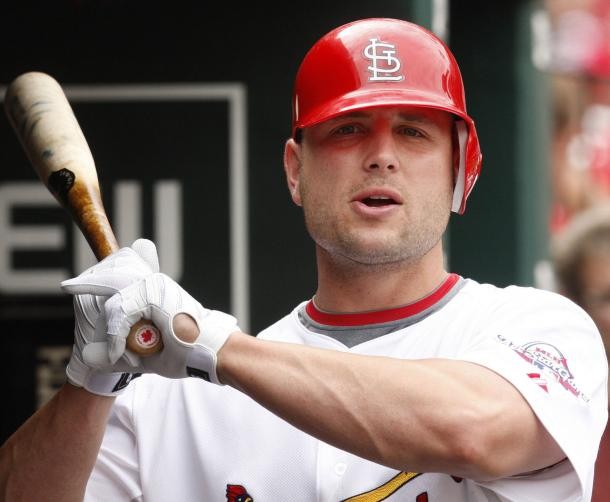 It's a surplus of riches unlike any other in professional baseball. Between their major-league roster and that of their Triple-A affiliate here in Memphis, the St. Louis Cardinals have seven outfielders willing and able to claim they belong in the Cardinals’ everyday lineup ... now. So why does the Cardinal outfield not feel right? As the season hits the quarter pole and the defending National League champions hover around the .500 mark, here’s a look at “the seven who would be three.” With apologies to Shane Robinson and Joey Butler, who would rank no better than eighth on this list. (Players are listed by age, descending order. All statistics are through Sunday’s action.)

• Matt Holliday (34) — Holliday has been a steady presence in leftfield since the Cardinals acquired him from Oakland in July 2009. A three-time All-Star wearing the Cardinal uniform, Holliday has been a part of four playoff teams with St. Louis, though if you had to name his signature postseason moment, it could be the dropped fly ball that cost the Cardinals a game at Dodger Stadium in 2009. Holliday is signed through 2016 (with a team option for 2017) and earns $17 million a year. But no player is untradeable. As the Cardinal outfield’s game of musical chairs continues, factor in the possibility of leftfield opening up if the right deal presents itself.

• Allen Craig (turns 30 in July) — Craig pulled off the impossible and replaced Albert Pujols at first base for the Cardinals in 2012. But with the emergence of Matt Adams — who can play first base and first base only — Craig moved to right field this season following Carlos Beltran’s departure to New York. Craig’s hitting has been metronomic throughout the Cardinals’ system, and he hit a jaw-dropping .454 last season with runners in scoring position. Which makes his start this season (.221 batting average, .357 slugging percentage) all the more puzzling. He’s signed through 2017, with a team option for 2018, earning $2.75 million this season, but $9 million by 2016.

• Jon Jay (29) — He doesn’t hit for power. He’s not fleet of foot (though he led St. Louis with 10 stolen bases in 2013), and will never win a Gold Glove. Jay has simply helped win a lot of baseball games, first in Memphis (where he manned center field for the 2009 PCL champions), then in St. Louis, where he took over in center after Colby Rasmus was traded, then delivered a key hit in the Cardinals’ epic comeback victory in Game 6 of the 2011 World Series. He played in 157 games for another pennant-winner last season. Yet the Cardinals traded fan favorite David Freese last fall for another center-fielder.

• Peter Bourjos (27) — He doesn’t hit for power either. But Bourjos is about as fleet as they come, bringing an element to the base paths and center field that St. Louis hasn’t seen at least since Ray Lankford’s prime in the late Nineties. That speed was enough for Cardinal general manager John Mozeliak to sacrifice Freese, gambling that the former Angel could win games even as a .250 hitter. (In his one full season in the majors — 2011 — Bourjos hit .271 with 11 triples and 12 homers.) He’s shared time with Jay this season and has struggled to make an impact at the plate. He did deliver some big hits in Atlanta and Pittsburgh last week, though. You get the feeling center field (for now) is his position to win.

• Stephen Piscotty (23) — If you met Piscotty wearing a coat and tie, his 6-3, 210-pound frame would tell you he’s an athlete. The former third-baseman has a big-league arm and appears bound for a corner outfield spot in St. Louis (or elsewhere). Playing primarily right field for Memphis, Piscotty is hitting .311 and has driven in 24 runs (second on the team) in 35 games. He slammed a pair of home runs onto the left field bluff at AutoZone Park last Saturday night. He’ll be playing in the major leagues in 2015.

• Randal Grichuk (22) — Part of the deal that sent Freese to Los Angeles, Grichuk made his Cardinal debut last month, but saw action in only nine games (three hits in 21 at-bats) before returning to Memphis. Grichuk earned one of three Gold Gloves awarded to outfielders throughout the minor leagues in 2013. Redbird manager Pop Warner prefers him in center field, though Grichuk seems to have the kind of bat (.566 slugging percentage in Memphis) that could land him comfortably in right or left. He has brought “abundance” to the Cardinals’ outfield surplus.

• Oscar Taveras (turns 22 in June) — Whatever happens to the six players above, mark this down: Taveras will be playing every day — presumably for St. Louis — in the majors next season. His tools at the plate, while still being refined, can’t be taught: full coverage of the hitting zone, gap-to-gap power, and speed out of the box. After losing most of his 2013 season to an ankle injury, Taveras is hitting .293 with the Redbirds and leads the team with 27 RBIs and 22 runs scored. A lingering question seems to be whether or not he can play center field in the big leagues. If he’s the kind of hitter scouts remain convinced he will be, room can be made in any outfield.

The one intangible shared by all seven of these outfielders is the certainty they’ll be happiest — and presumably, most productive — when they’re playing every day with two cardinals on their jersey. For what it’s worth, I can see a 2016 Cardinal outfield with Craig in left, Taveras in center, and Piscotty in right. The beauty of the current surplus, though, is that I could be wrong at every position and the Cardinals may still have a superior trio roaming the pasture at Busch Stadium.