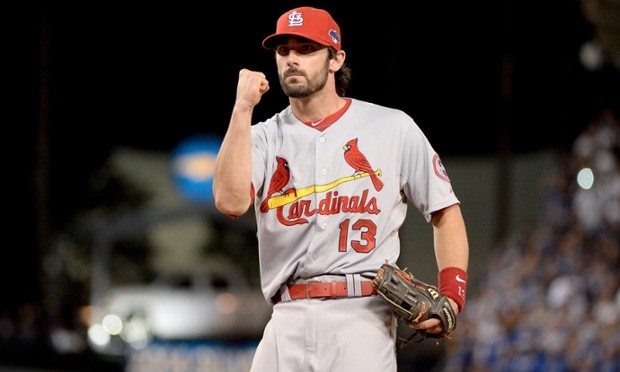 You could have won a bet or two last March had you suggested Jorge Rondon, Eric Fornataro, Nick Greenwood, and Marco Gonzales (who??) would each pitch for the St. Louis Cardinals before the 2014 All-Star break. (The next time someone suggests a baseball team has too much pitching, stifle laughter and take the conversation elsewhere.) Injuries have compromised what appeared to be the deepest pitching staff in baseball, sending three Cardinal starters — Joe Kelly, Jaime Garcia, and most ominously, Michael Wacha — to the disabled list and leaving the fate of the defending National League champions all the more on the right arm of ace Adam Wainwright.

But even with the I-55 pitching shuttle from Memphis, (don’t forget Sam Freeman or Tyler Lyons), the Cardinals’ current crisis of confidence has more to do with the men trusted to score runs than with those tasked with preventing them. Even with a 1.89 ERA (through Sunday), Wainwright has four losses. Before going down with his mysterious shoulder injury, Wacha lost five games despite a 2.79 ERA. Near the bottom of baseball in runs and home runs, the Cardinal batting order no longer intimidates.

After St. Louis lost the 2013 World Series to Boston, Cardinal general manager John Mozeliak decided to part ways with a pair of veterans — rightfielder Carlos Beltran and third-baseman David Freese — to open playing time for a pair of recent Memphis Redbirds: second-baseman Kolten Wong and first-baseman Matt Adams. This transition required a pair of position moves by a pair of 2013 All-Stars, with Matt Carpenter shifting from second base to his natural spot at third, and Allen Craig moving from first base to rightfield. Whether or not it’s related to the position switch, Carpenter and Craig have underperformed, and dramatically when compared with their 2013 numbers. After leading all of baseball in hits last season, Carpenter has seen his batting average drop from .318 to .282. Worse, he’s striking out far too frequently (65 times) for a leadoff hitter (he went down 98 times all of last season). As for Craig — a metronomic .300 hitter throughout his professional career — the drop in production has been precipitous. He’s currently batting .249 (compared with .315 a year ago) and slugging .365 (compared with .522 just two years ago). With Craig signed through 2017 and Carpenter through 2019, these are numbers that need to take a turn for the better. Taken together, they’re a tipping point.

Solutions? The Cardinals hope one is Oscar Taveras, the hitter scouts and Cardinal fans have been breathlessly anticipating for two years now. After a 2013 season compromised by an ankle injury, Taveras homered in his Cardinal debut at Busch Stadium on May 31st. (To this point, it’s the highlight of the Cardinal season.) But after struggling (.189 batting average) through 11 games, Taveras returned to Memphis, where he resumed mashing pitchers in the Pacific Coast League (.318 batting average, .502 slugging percentage with the Redbirds). The challenge for St. Louis is finding Taveras a regular spot in the batting order (he was recalled to St. Louis last week). The Cardinals have been resistant to playing Taveras in centerfield, so he’ll have to share time with Craig in right or veteran Matt Holliday in left if he’s to make anywhere near the impact the Cardinals hope he does. (As a left-handed batter, he could theoretically platoon with either of the other two right-handed corner outfielders.)

Beyond Taveras, the Cardinals will at least dip their toes in the trade waters this month (the non-waiver deadline is July 31st). And this is where current Redbird prospects like Stephen Piscotty and Randal Grichuk could come into play. If the Cardinal system has a surplus anywhere — it’s not pitching, remember — it’s in the outfield. Could a run-producing third-baseman or second-baseman be found? (A shoulder injury recently sidelined Wong, who homered in his return to St. Louis Sunday .) Bottom line: for the first time since the Cardinals acquired Mark McGwire during the 1997 season, their offense is without a marquee slugger. The highest-paid hitter remains Holliday, whose current averages (.263 batting, .378 slugging) are shades of his career figures (.309, .523). In some respects, he’s the face of this season’s struggles. For an offense that leads the National League in double plays, Holliday has hit into the most: 13.

The Milwaukee Brewers are for real. The Pittsburgh Pirates and Cincinnati Reds are back in contention after sluggish starts. For the first time in years, the St. Louis Cardinals are fighting for relevance, not so much among World Series contenders, but within their own five-team division. Take comfort, Cardinal Nation, in the Chicago Cubs.