The NBA — and Mike Conley — Gets Ready to Grind 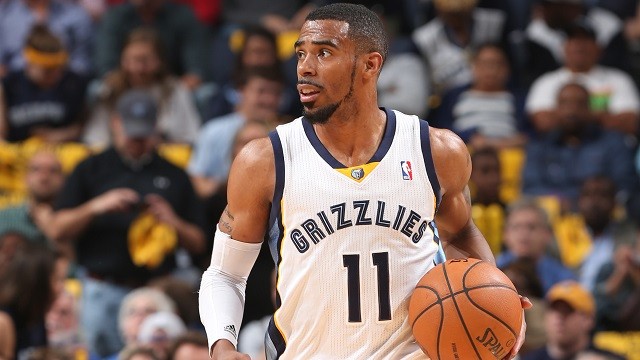 Mike Conley started 46 games as a rookie with the Memphis Grizzlies in 2007-08, the same season a guy named Derrick Rose played point guard for the Memphis Tigers. Since the 2008-09 season, the Bluff City’s favorite college basketball team has featured Tyreke Evans, Willie Kemp, Joe Jackson, Antonio Barton, and Joe Jackson (again) at point guard, with varying degrees of success. Over the same six-year period, the Bluff City’s favorite NBA team has featured Mike Conley at point guard, the one and only. The Griz have played 476 regular-season games over the last six years and Conley has started 436 of them. He is, let it be said, a civic institution at the tender age of 27.

I present this somewhat twisted contrast between pro and college point guards in Memphis only to accentuate one of the few faces that will feel truly familiar in the upcoming NBA season. For we hoop fans are about to witness a season as fresh and different as any in recent memory. Consider the following:

• The Boston Celtics, Los Angeles Lakers, and New York Knicks each missed the playoffs last season. Never before in the league’s 68-year history had all three of these bluebloods been home for the games that matter. The Lakers and Knicks each lost talented big men (Pau Gasol and Tyson Chandler, respectively), and the Celtics can best be described as rebuilding.

• You may have heard LeBron James is a Cleveland Cavalier (again). He’s now running alongside former Timberwolves All-Star Kevin Love. And maybe the best young point guard in the NBA (Kyrie Irving). Funny how the travels of the game’s best player redefines what constitutes a “Big Three.”

• Two players with Memphis on their resume — Pau Gasol and Mr. Rose — are teammates in Chicago. If Rose — the 2010-11 MVP, remember — can stay healthy a full season, and if Gasol is invigorated by the move east, the Bulls may prove to be one of the few clubs capable of testing mighty Cleveland, especially with Indiana’s All-Star, Paul George, sidelined for the season after breaking his leg competing for the U.S. team at the FIBA World Cup.

• There are only five NBA franchises coming off consecutive 50-win seasons. Three of them have recently reached the Finals (Miami, San Antonio, and Oklahoma City). The other two are the Los Angeles Clippers and Memphis Grizzlies, each the other’s worst nightmare, a challenger capable of eliminating title hopes before the conference finals. Whether or not the national media has noticed, the Memphis Grizzlies have joined the NBA’s elite, built around a roster — and a familiar point guard — that would delight fans in Boston, New York, or L.A.

There is one NBA presence that hasn’t changed all that much. The championship again resides in San Antonio, home to the league’s only cyborg. (Trust me, Tim Duncan will be winning championships when he’s “age” 65.) The Spurs will visit FedExForum on December 5th and December 30th, the two best early-season samplers for what kind of contender the 2014-15 Grizzlies might be. Is there room for development among the Memphis “Big Three” (Conley, Zach Randolph, and Marc Gasol). Will the arrival of a future Hall of Famer (Vince Carter) improve the Grizzlies’ perimeter game as much as it will an already-tight locker room? And what might some young blood — forward Jarnell Stokes or guard Jordan Adams — add to the mix? (I for one, love the idea of Stokes learning the pro game under Randolph’s wing.)