The Grizzlies' Fab Four ... as KISS

Four distinct members of a team, each with his own passionate fan base . . . but better as a unit than they’d ever be as solo acts. Together, they pack arenas and bring fans to their feet screaming in exultant joy. They are Mike Conley, Marc Gasol, Zach Randolph, and Tony Allen, the Grizzlies’ longtime fab four.

But read that intro again. Could the same not be said for rock-and-roll Hall of Famers KISS? As a card-carrying member of the KISS Army since well before any of the Grizzlies’ fab four were born, I’ve had this column brewing since the first pyrotechnic introduction of the Grindfather at FedExForum. Line up these two bands and it’s not hard to connect the dots.

The Catman (originally Peter Criss, currently Eric Singer) — Marc Gasol The backbone, the heartbeat, the pulse of his team. A position that requires a proper combination of muscle and touch, rhythm always paramount. I like to picture Gasol in his younger, shaggier days with the Grizzlies when I see him wearing the whiskered face-paint made famous by Criss. Gasol rose from obscurity (overshadowed by the older brother for whom he was traded) to become the first Memphis player elected to start in the All-Star Game. Just as Criss carried the vocals for “Beth,” the ballad that ironically carried his speaker-blowing band to the top of the charts in 1976.

The Spaceman (originally Ace Frehley, currently Tommy Thayer) — Tony Allen This is the easiest pairing of the four. Whether you picture Allen kicking Chris Paul in the head or pummeling teammate O.J. Mayo on an airplane, the Frehley classic “Shock Me” would make for a nice soundtrack. Muscle-flexing, arms pumping during timeouts (as the rest of his team listens to instructions). Full-body gyrations upon the ball being awarded to Memphis after a turnover. Not to mention nightly assignments to lock down the opponent’s top scoring threat. If any Grizzly ever spontaneously bursts into smoke (as Ace’s guitar did for hundreds of concerts), it will be Tony Allen. His tenure in Memphis has been a “Rocket Ride,” to say the least.

The Demon (Gene Simmons) — Zach Randolph Line the Grizzlies up on the baseline and ask for a volunteer to regurgitate blood and, later in the show, spit lighter fluid over a burning torch (thus, “breathing fire”). After Allen is excluded (imagine the consequences of a flame in his hands), there’s only one man for such showmanship. Just as Gene’s bat-wing makeup has become the definitive “face” of KISS, so Randolph embodies the Grizzlies’ most successful, enduring run as NBA championship contenders. The only way I see the ferocity of Randolph’s image growing is for him to add knee-high boots with scales and seven-inch fangs as platforms. Z-Bo’s soundtrack would open with “I Love it Loud” and close with “God of Thunder.”

The Starchild (Paul Stanley) — Mike Conley Their surnames are similar, and each is the youngest member of his band. (Paul is the youngest of the original four KISS members.) Every group needs a front man, and the Grizzlies’ longtime point guard has been front and center for his team since starting 46 games as a 20-year-old rookie in the 2007-08 season. No one has sung more KISS tunes than Stanley and no one has played in more Grizzly games than Conley. When Conley drains a three-pointer and brings that “okay” sign to his face, I like to picture his right eye within a black star. Conley’s signature KISS song? As the franchise’s career leader in steals, it has to be “I Stole Your Love.”

Grit and grind all night. And party every day. 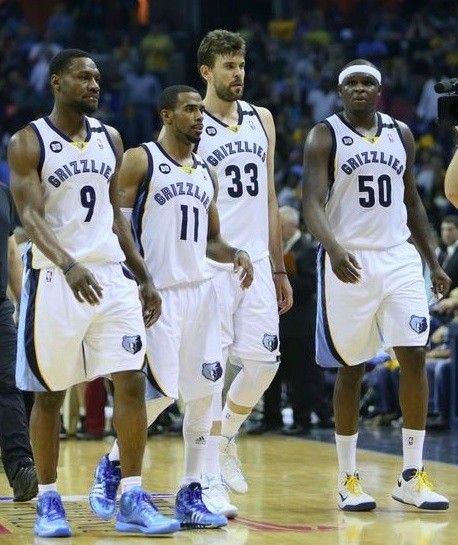