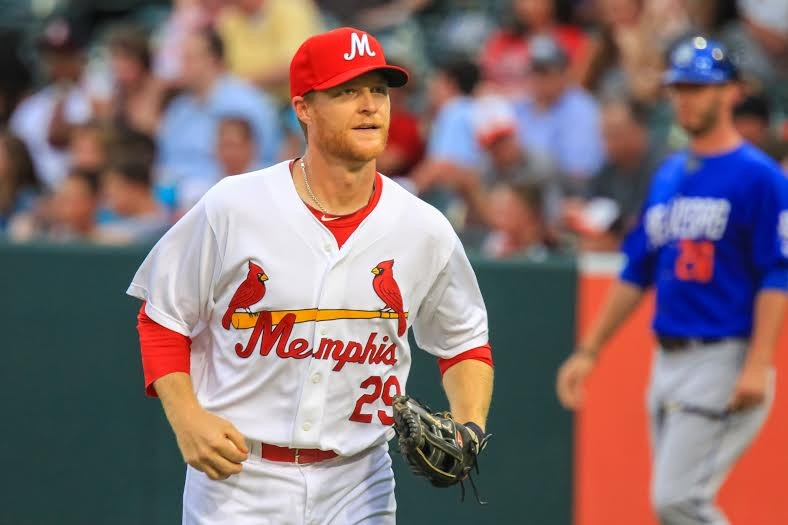 The Memphis Redbirds were stumbling along with a record of 8-15 on May 4th when their parent club in St. Louis signed Dan Johnson. The transaction didn’t make headlines, not even here in Memphis. Johnson had been released by the Cincinnati Reds two weeks earlier after playing nine games with Louisville, the Reds’ Triple-A affiliate in the International League.

Two days later, Johnson slammed a 3-run, walk-off homer at AutoZone Park to give Memphis a 6-5 win over Colorado Springs. It was Johnson’s first home run in a Redbirds uniform . . . and the 240th of his lengthy minor-league career. (Only Toledo’s Mike Hessman has hit more among active players.) Since the 35-year-old slugger’s arrival, Memphis has turned its season around, going 26-15 and climbing back into contention in its division of the Pacific Coast League.

Johnson is Crash Davis — of Bull Durham fame — come to life. He played his first professional game (with Vancouver in the Oakland A’s system) in 2001 and his first game at the Triple-A level (with Sacramento) in 2003. Unlike Kevin Costner’s character, though, Johnson has had some time in The Show, appearing in 431 games with five major-league teams. He hit the most famous home run in Tampa Bay Rays history, a ninth-inning shot in the last game of the 2011 season that tied the score and allowed the Rays to later clinch a playoff berth. But Johnson’s big-league achievements have been interspersed with stints in the bushes. He’s one of two men in baseball history to be named MVP of both the Pacific Coast League (with Sacramento in the River Cats’ 2004 championship season) and the International League (with, you guessed it, the Durham Bulls in 2010).

The secret to sustained happiness when traveling so many miles — over so many years — on the baseball map? According to Johnson, it’s as simple as being a good teammate.

“I enjoy being around the guys,” he says, “and helping out. If you get the label of being a bad clubhouse guy, or selfish . . . teams don’t want that around. It wears on other players. When I first got to Triple-A, it was unheard of for a young guy to be at that level. You respected the veterans. I learned from the vets in front of me, and listened to what they had to say.”

Johnson’s felt the sting of being traded or demoted, but each time has dusted off any bitterness, packed his gear, and headed for the next franchise and next challenge. “You can’t feel sorry for yourself,” he says. “I got traded from a good situation in Houston [last spring] to Cincinnati. From the beginning, it didn’t seem right, and it never was right. But if it didn’t happen, I wouldn’t have gotten the opportunity to play for the Cardinals. Things happen for a reason.”

Johnson won’t accept credit for the Redbirds’ improved play since his arrival. (Despite not appearing with the Redbirds in April, Johnson is second on the team with 28 RBIs.) “It wasn’t that the talent wasn’t here,” says Johnson. “We just needed to put it together; change the mindset a little bit. This game is very humbling. If you stay down, you’re never going to win. You go out there and know that you can win, instead of just hoping.”

The Cardinals’ system is the eighth in which Johnson has played, and he recognized a different culture within days of his arrival in Memphis. “It’s been awesome,” he says. “The way you go about your business here, the way everybody’s pulling for everyone else. It’s not something you see often. The guys here are rooting for the players with the big-league club. In a lot of organizations it’s, ‘I hope that guy stinks, or that guy’s hurt.’ There’s no negativity here. The value this organization brings, and the tradition in St. Louis is amazing. The way they teach things, the thought process.”

Johnson’s entire family — his wife and four children — have joined him for a summer in Memphis, one he hopes takes a detour through St. Louis. He’s seen much of the baseball world (including the 2009 season in Japan), but has yet to land the sport’s most prized possession. “There’s nothing like the playoffs in the big leagues,” says Johnson. “There’s no better feeling as a baseball player. I don’t have a [championship] ring, and I’d love to get one. I’d love to play till I’m 100. Until I can’t compete, I’m going to go out there and try to get a job and make a difference.”