September 17, 2018
comment
It's unlikely Stubby Clapp and Darrell Henderson have met each other. One manages a professional baseball team (our Triple-A Memphis Redbirds), his season ending in September. The other carries the ball for a college football team (our University of Memphis Tigers), his season beginning in September. It would be a nice tandem photo, though, of Clapp and Henderson arm in arm. For they have delivered the kind of star power that fuels a fan base, regardless of season.

Over the course of 27 hours last weekend, within about 10 miles of each other, Clapp and Henderson further solidified their places in Memphis sports history. The junior tailback rushed for 233 yards — on merely 14 carries — and scored two touchdowns to help his Tigers eviscerate Georgia State at the Liberty Bowl. Henderson has 521 rushing yards over his first three games, tops in the entire country. No one will confuse Georgia State's defense for Alabama's, but 4.3 speed doesn't slow for any opponent. With good health (and maybe a few more carries), Henderson will enter All-America conversations and climb NFL draft boards, another college season of eligibility be damned.

As for Clapp, he delivered a second-straight Pacific Coast League championship to Memphis, despite being asked by the parent St. Louis Cardinals to juggle 66 players over the course of the five-month season. (Last year it was merely 62.) Clapp's entire starting rotation and outfield — at least those we saw in April — are now in uniform for St. Louis. But it didn't matter. Clapp sent Tommy Edman onto the field, an infielder who spent most of his season at Double-A Springfield, and Edman proceeded to earn co-MVP honors — with Randy Arozarena — for the PCL championship series. (Ironically, Edman is one of just two Redbirds position players to appear in the championship series each of the last two years, the other being shortstop Wilfredo Tovar.) Edmundo Sosa, playing third base, caught the final out in Saturday night's clincher. Like Edman, Sosa played more games this season at Double-A than Triple-A. Didn't matter. He's being sized for a Pacific Coast League championship ring.

Clapp and Henderson are bound for the highest level of their respective sports. A manager who wins back-to-back championships at the highest level of the minor leagues with whomever the parent club provides brings the kind of touch major-league teams crave. A running back whose 54-yard touchdown run is merely second on his game-night highlight reel is an all-too-rare breakaway talent most NFL teams lack. 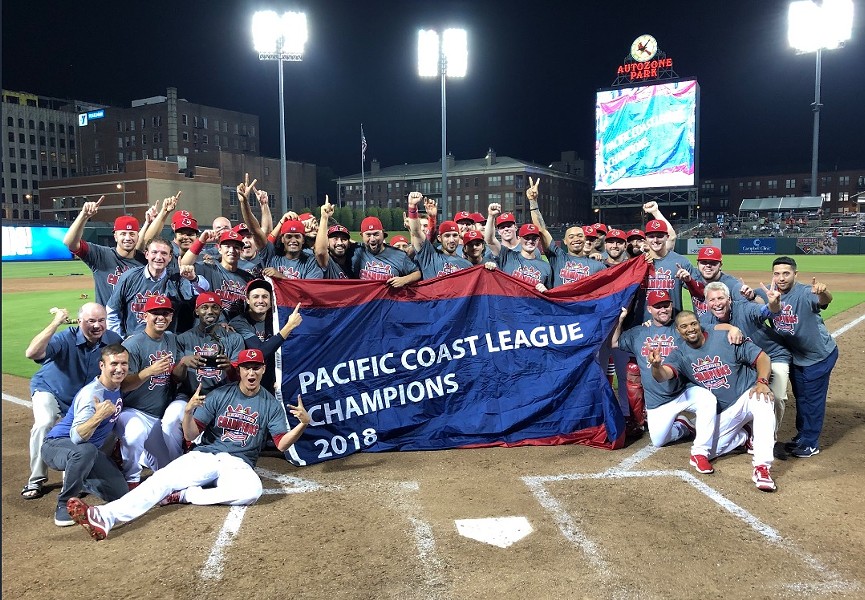 Thanks to the NBA's Grizzlies, Memphis has been a "big-league town" for 17 years now. And it's nice to belong at the adult table for sports. But let's not lose an appreciation for the rising stars we glimpse on their way to larger stages, brighter lights. A fan's greatest challenge is recognizing — identifying — history before it happens. Crystal balls shatter like light bulbs in the hands of analysts and those paid the big bucks to forecast greatness. (Where are you, JaMarcus Russell? Anyone seen Greg Oden recently?) Stubby Clapp and Darrell Henderson will be wearing different uniforms in the near future. Which makes the present they've provided Memphis all the more special. Extraordinary even.

• The Redbirds are now one of only three current PCL franchises with as many as four championships. (Tacoma has five and Sacramento four.) And only Sacramento has won as many since Memphis joined the PCL in 1998.

• Henderson has a slight lead over Wisconsin's Jonathan Taylor atop the country's rushing leaders. He's averaging 173.7 yards per game while Taylor has averaged 171.7. Taylor has the advantage of one of the biggest and best offensive lines in the country, though he also faces a Big Ten schedule, while Henderson will be able to feast on AAC competition. Also keep an eye on Henderson's career total (currently 2,157 yards). He stands a reasonable chance of becoming only the second Tiger to gain 3,000 yards on the ground. DeAngelo Williams, it should be remembered, gained 6,026.