Out of Their League: Express Exit for the AAF

April 08, 2019
comment
I liked the idea of the Alliance of American Football. I had plans to attend the Memphis Express season finale this Saturday at the Liberty Bowl, a showdown with the Atlanta Legends. My wife was going to join me. (As a measure of our commitment, consider Sharon's policy of "one live football game per decade.") Alas, there will be no Express-Legends showdown, as there is no longer a Memphis Express, Atlanta Legends, or AAF. Simply put, the upstart league ran out of money and its largest investor — Carolina Hurricanes owner Tom Dundon — turned off the lights with two weeks to go in the regular season. 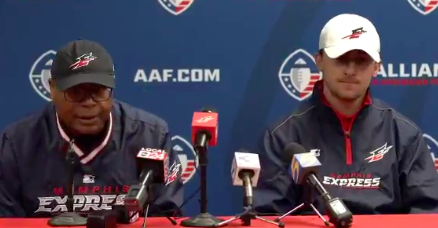 The venture had a steep climb to credibility, first in terms of marketing then financially. (The two go together.) Without stars on the field — and Johnny Football for two games in late March doesn't count — the AAF had little to sell the American sports fan beyond flashy (or not-so-flashy) uniforms. Chilly weather and basketball season didn't exactly help fill football stadiums. Despite lukewarm backing from the NFL (live games could be found on the NFL Network among other cable channels), "the Alliance" clearly didn't attract the sponsors and advertisers envisioned by founders Charlie Ebersol and Bill Polian.

Ironically, the AAF's final desperate plea for life — borrowing players from NFL rosters — may have been the concept that would sustain a development league for pro football. Those who scoff and say the NFL already has a development league (initials: NCAA) do so under the premise a football player can only develop between the ages of 18 and 23. Ask former Memphis Tiger star Paxton Lynch about the importance of development after a player's college days are over. If the NFL and AAF had established ground rules for the player-sharing, starting with a limit on the number of total games a player could enter in a calendar year, there might have been legs for the gridiron minor league.

As for Johnny Manziel and his two-game Memphis legacy? No concussion could stop JFF from clubbing (in L.A.!). He'll join the likes of Christian Laettner and Allen Iverson in the Bluff City sports not-so-Hall of Fame.

• In losing two of their first three games of the season to division rival Omaha, the Memphis Redbirds fell out of first place for the first time in 708 calendar days. It's the final statistical salute to a remarkable two-year stretch that saw the St. Louis Cardinals' Triple-A affiliate win two Pacific Coast League championships and last year's Triple-A National Championship. The good news is that the season isn't even a week old, with first place in the Redbirds' division still very much up for grabs. On his way to Memphis is Alex Reyes, for three years now the Cardinals' top-ranked prospect. The flame-throwing righty has missed most of the last two seasons to injury, though, and got knocked around out of the Cardinals' bullpen in the first week of the season. He'll get regular work under the watch of Redbirds pitching coach Dernier Orozco, with the primary goal of establishing arm strength and a rhythm for Reyes in his current role as a relief pitcher.

• Hats off to the AutoZone Park grounds crew. At least for the Redbirds' opening home stand, the field showed no indication that two professional soccer matches have been played there. And the pitcher's mound looked precisely like a mound should. (It takes between three and four hours to build the mound after it's been shaved off for a 901 FC game.) There appears to be structural harmony between professional baseball and soccer at the stadium, celebrating its 20th season — baseball season, that is — in Memphis.