Beat Me in St. Louis: The Cardinals' Crisis

June 17, 2019
comment
The St. Louis Cardinals are fluttering. While much of the team's fan base basks in the silvery shine of the St. Louis Blues' first Stanley Cup championship, the esteemed baseball club — owner of 11 trophies of its own — is hovering around break-even in a season it was expected to make a return to meaningful games in October. Here in Memphis, the Triple-A Redbirds have dropped even further in the standings, the two-time defending Pacific Coast League champions are wobbling with a record of 29-41 through Sunday, essentially out of contention for another playoff berth before the Fourth of July. 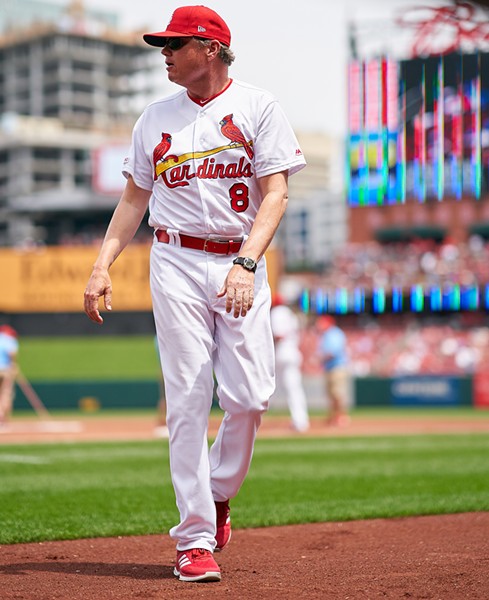 What to make of the struggles? Seventy baseball games make for a considerable sample size. By now, the Cardinals should know what they have (and have not). A rotation of starting pitchers considered as deep as any in the National League in March now finds itself without an ace, minus that "stopper" who can end thoughts of a lengthy losing streak with a shut-down performance. Miles Mikolas was The Guy last season (18-4, 2.83 ERA), but this season appears to be merely a guy (4-7, 4.83 through Sunday). Young Jack Flaherty is the ace of the future, but emphasis on future, as the 23-year-old righty is sporting a 4.28 ERA and last won a game on May 14th. Veteran Adam Wainwright (5-6) has landed on the injured list with a hamstring injury, and Michael Wacha — just last week returned from a brief banishment to the bullpen — got mauled by the New York Mets in his last start. When a rookie (Dakota Hudson) is your most consistent starting pitcher, your baseball team will struggle.

And the Cardinal hitters have been no more consistent than the pitchers. Newly acquired Paul Goldschmidt — armed with a new contract extension — brought the kind of All-Star resume expected to fuel the St. Louis batting order for years. Through Sunday, the slugger is fifth on his team with 29 RBIs. Making matters worse, only one of the four teammates ahead of him (Marcell Ozuna) has driven in as many as 40 runs. This is not a potent attack Cardinal manager Mike Shildt is fielding.

Is help on the way? Three Memphis Redbirds recently made their big-league debuts for the Cardinals. Lefty Genesis Cabrera doesn't appear to be a threat to any of the struggling starting pitchers in St. Louis. Catcher Andrew Knizner is a legitimate prospect, but returned to Memphis the moment Yadier Molina's wounded right thumb healed. And Tommy Edman is a versatile talent, both with the bat and glove. Will he be a difference-maker for the 2019 Cardinals. That's a stretch.

In a season of bewildered looks, the "face of the franchise" may well be Alex Reyes, still the Cardinals' top prospect, now toiling for Memphis. Since his return from a broken finger — injured when he punched a wall in frustration over a poor outing — Reyes hasn't missed a lot of bats with his arsenal. In three June starts, Reyes has surrendered 14 earned runs in 12 innings, never reaching the sixth inning in any of those starts. A young man who appeared to be ace material is now some distance from being merely big-league material.


Baseball is merciless — and relentless — in its everyday schedule. Players have little time to "find themselves" when lost on the mound or at the plate. If Goldschmidt hits in the season's second half like he has in the first, the Cardinals will miss the playoffs a fourth straight season. (Something that hasn't happened since 1988-95.) On the other hand, if Goldschmidt finds his groove and if Matt Carpenter becomes a shadow of the homer-machine he was last August, the Cardinals are within range of the Brewers and Cubs in the National League Central.

Old friend Albert Pujols returns to St. Louis this weekend, the three-time MVP's first appearance at Busch Stadium since he departed for the L.A. Angels after the Cardinals' 2011 championship season. Perhaps a reminder of the most recent glory days will spur a turnaround for the Cardinals. There's lots of baseball to be played yet for the Cards. Will the coming months be an extended slog or a return to glory?