Baseball at Its (Almost) Best

September 09, 2019
1 comment
If you've ever attended a Memphis Redbirds game at AutoZone Park, there's a book I urge you to read, and particularly if you saw a game on a Tuesday night in August, with maybe 400 other fans in the stadium. Where Nobody Knows Your Name: Life in the Minor Leagues of Baseball is John Feinstein's account of a season (2012) in the lives of men who make a living playing (or managing, or umpiring) baseball . . . but barely.

With Frank Deford no longer with us, Feinstein may be the best sportswriter anywhere near a press box today. (Two other Feinstein books that set a standard beyond reach by most writers: A Season on the Brink and A Good Walk Spoiled: Days and Nights on the PGA Tour.) His exploration of baseball in Triple A — one phone call shy of the major leagues — is an extraordinary account of how to manage disappointment, to live with a dream teasing you for years, if not decades. 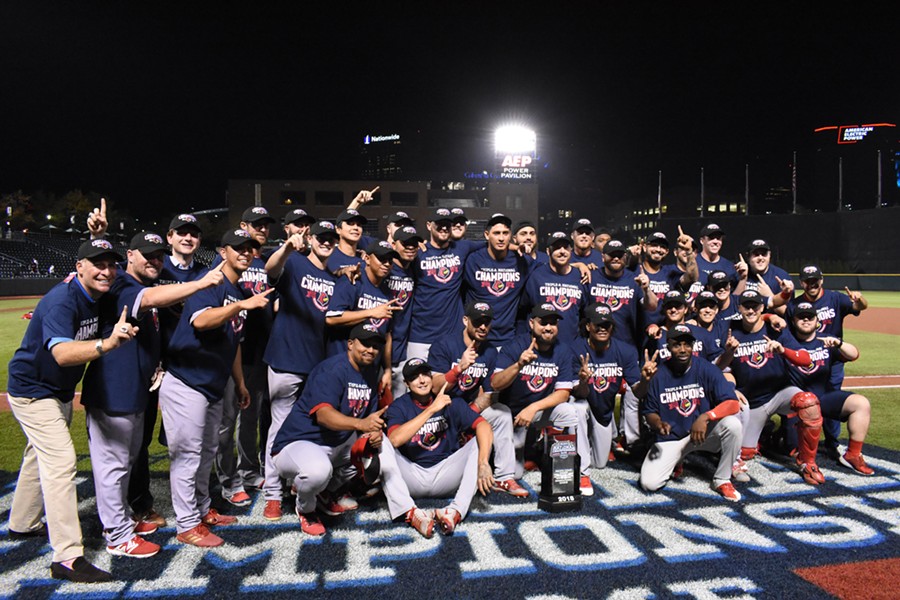 This version of professional baseball will be on stage for a national TV audience next Tuesday (September 17th) when the Triple-A National Championship returns to AutoZone Park. It's an annual winner-take-all contest, now with a four-year connection to Memphis.

In 2016, the Scranton/Wilkes-Barre RailRiders (top farm club for the New York Yankees) beat the El Paso Chihuahuas, 3-1, in front of 9,471 fans at AutoZone Park. (Yes, the "attendance" was tickets sold. But I was there. It was a good crowd for one with virtually no rooting interest.) Then, in both 2017 and 2018, the Memphis Redbirds (champions of the Pacific Coast League) played the Durham Bulls (International League champs) for the Triple-A title. The Redbirds lost two years ago in a game played at PNC Field (Scranton/Wilkes-Barre's home park), then won last year at Huntington Park in Columbus, Ohio.

This year, the Round Rock Express (Houston Astros) and Sacramento River Cats (San Francisco Giants) are squaring off for the PCL championship, while Durham (Tampa Bay Rays) and the Columbus Clippers (Cleveland Indians) battle for International League honors. The winners will meet at AutoZone.

It's funny — well, actually heartbreaking — how talented Triple-A baseball players are and how little fanfare (or salary) they receive. Don't take it from me. Consider these words from David Bell in Feinstein's book. At the time, Bell was managing the Louisville Bats, Triple-A affiliate of the Cincinnati Reds. (Bell is now the Reds' manager.)

"Most of the year is about grinding. It's about being 0 for 4 and finding a way to get a hit in that fifth at-bat. It's about taking an extra base when you can to help the team or moving a runner or making a play on defense. ... You can be in the worst slump of your life and there's still a way to help the team. ... If you compete when it's hard to compete ... that's when you become a real baseball player."

No one wants to be in a Triple-A clubhouse. Players who have tasted the major leagues resent the return to "the bushes" as the minors were once called. Rising prospects, once they reach Triple-A and can taste big-league fame and fortune, are even more impatient. The irony to this, of course, for any of us who played baseball in Little League or high school (as I did): a Triple-A stadium is a glorious shrine. And the game at this level is superb. (Wondering about the difference between Triple-A baseball and Double-A? Watch a double-play turned. Middle infielders in Triple-A are ready for The Show when it comes to their glove work.) The sad truth: home runs and walk-off wins aren't shared all over social media when they happen in El Paso or Omaha, no matter the muscle or drama involved.

Redbirds president Craig Unger is among those who relish life "where nobody knows your name." And he's especially pleased to have next week's event back on his diamond. "It’s quite an honor to be the first repeat host of this game in its current format," says Unger. "This is a great sports town, and people in Memphis love their baseball. We’re excited to once again showcase our great city on national television, and we’re looking forward to crowning a national champion right here in Downtown Memphis.”

Whether or not the players' names are known next week at AutoZone Park, Memphis baseball fans will see the game played at its very highest level shy of a major-league stadium. And no one will feel that distance more than those in uniform. They deserve to be celebrated, even for just one night.