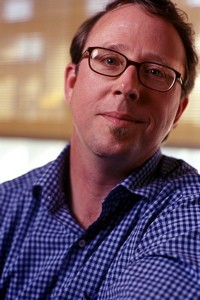 John T Edge (pictured) was on Lynne Rossetto Kasper’s The Splendid Table Sunday morning to talk about Craig Claiborne, the late restaurant critic for The New York Times and a Mississippi native.

According to Edge, Claiborne’s importance to American culinary culture is sorely under-recognized.

“He’s due,” he told Kasper. To that end, the SFA has renamed its lifetime achievement award after Claiborne. The winner will be announced during the symposium. And while Edge refuses to reveal the name, he hinted that the winner is someone who’s written about both food and music.

Someone who is not lacking in attention and who is scheduled to attend the conference is David Chang of NYC’s Momofuku. Of today’s culinary stars, it’s hard to name one who shines brighter.

On Saturday, October 31st, Chang will be featured during the Symposium’s “Viking Range Luncheon,” which will feature pork, corn, peanuts, and (the intriguingly named) postmodern redeye gravy.

Also making an appearance is Ballet Memphis, which will perform a dance based on Roy Blount Jr.’s writings for the “Chitlin Ballet” on Sunday, November 1st.

Edge gives Ballet Memphis’ Dorothy Pugh a world of credit for not only “getting it” in designing a dance around pork but also bringing the troupe down on a Sunday morning.

Of course, those attending the symposium can expect to eat … a lot. There will red beans and rice, a “catfish feed,” and a pig- and goat-roasting among other stuff-your-gills events.

“I tell vegetarians, they’re going to have a really tough time,” Edge says. As for the others, he advises, “Come with an appetite.”

So what’s next for the SFA? Edge says they’ll be exploring the “international South,” the theme of next year’s symposium.

For a full schedule of symposium events and more information, go to southernfoodways.com.