On the Scene at India Fest

India Fest 2010 packed the Agricenter, and there was plenty of delicious food to be had. 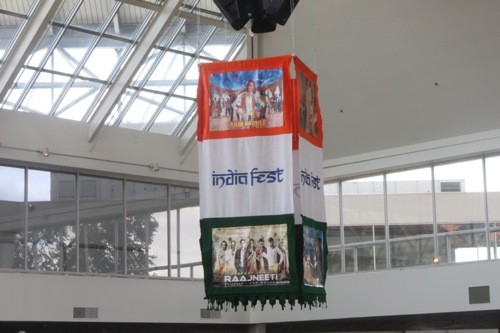 A number of different Indian states (which are tantamount to different countries, with different languages and traditions) were represented, and I tried to sample as much as I could. I took recommendations from the event organizers and was on my way...

From Tamil Nadu in southern India, I was told to try to dosa, a thin fried rice cake, but the booth only had idli, a similar steamed rice cake, and chili chicken:

From Maharashtra in southwest India, our very own vegan, Bianca Phillips, tried the recommended vadapav, which is a garlic potato ball dipped in chick pea batter, fried, and served on a bun:

Nearby, there was a station for Masala Paan, a tradition of eating betel leaves topped with Areca nuts, coconut, saffron, cardamom, cloves and other spices. It’s considered very sophisticated, and has an added breath-freshening benefit:

A number of local Indian restaurants were serving from their menus, so I stopped to grab a samosa, a crispy fried pastry filled with potatoes, onions, and peas, from Woodlands Vegetarian Restaurant on Hacks Cross:

At another booth, John Bragg of Circa and Vish Bhatt of Snack Bar in Oxford, MS were giving cooking demonstrations, using familiar Indian spices like ginger and curry:

Andhra Pradesh, on the southeastern coast of India, was serving its specialty Biryani, a spiced basmati rice dish, along with little fried chilis and tandoori meats:

Having stuffed my face, I went to scope out some beautiful saris, of which there were many:

These two were looking particularly dapper:

I couldn’t leave without henna, so I stopped by a booth on the way out:

India Fest was a huge success this year, and it seems to be getting bigger. If you didn’t get a chance to check it out this time, look out for it next August.