I mentioned earlier that I was curious about all the hub-bub regarding Chipotle. And then there's Five Guys.

I'm not about lines, though, and given the excitement, I decided to give it a few weeks for things to cool down.

I went to Chipotle about a month ago on a Saturday around 2 p.m. It wasn't crowded, but the place was starting to fill up.

I got the basic veg burrito with everything — beans, rice, salsa, etc. Very good, and it's huge, so I had dinner for later. Plus, I had earlier tried to make something like this at home, and it didn't turn out so good, but now I think I've got it figured out.

My first visit to Five Guys was three weeks ago around 2 p.m. on a Sunday. The line was out the door, so turned-tail.

The second visit two weeks ago was around 7 p.m. on a Saturday, and the line was manageable. 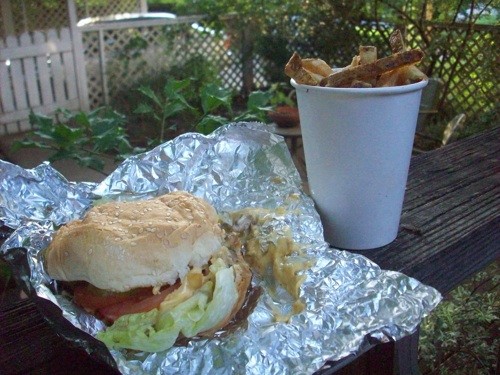 My first impression was, This place is loud. The second was, Damn, it's loud.

As for vegetarian options, Five guys offers grilled cheese and a veggie and cheese sandwich. The woman taking my order stressed that they do not do veggie patties.

I liked this sandwich more than I would have ever thought. It's all the toppings — lettuce, tomatoes, grilled mushrooms, onions, cheese, etc. — between two hamburger buns. And, like a mock apple pie tastes like an apple pie because of the cinnamon, all these toppings added up to what was something like a hamburger.

Alas, the whole thing fell apart after a few bites, but I had those great Five Guys fries for solace.