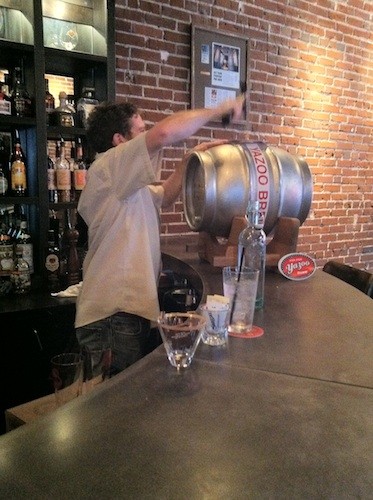 Last Wednesday, Local Gastropub hosted Ivan Chester of Nashville’s Yazoo Brewing Company and a cask of Yazoo Onward Stout infused with vanilla beans. For those of you who aren’t familiar with Yazoo, they’re a great little brewery that opened in 2003 (and had their 8th birthday last Saturday). Unless I’m mistaken, Yazoo doesn’t bottle Onward Stout, and it doesn’t seem to make its way to Memphis too often, so this was definitely a treat.

On their website, Yazoo describes this Irish-style dry stout as being made with English Pale malt, roasted barley, black patent malt, and flaked barley, and hopped with East Kent Goldings and Target hops. It comes out at 3.8% a.b.v. with 35 International Bittering Units (IBU’s).

Taking the first sip sent slightly bitter flavors of dark chocolate and espresso with more vanilla presence compared to aroma, playing nicely with the dark chocolate notes. I was surprised that Ivan had placed only four vanilla beans in the cask (or firkin, as they’re also known, which holds 9 gallons). It’s remarkable that so little can add so much flavor.

And Onward Stout is filled to the brim with flavor, which as a low a.b.v. beer, is difficult to do (think most American light lagers...not terribly strong with flavor not far from water)...gotta hand it to Yazoo for pulling it off.

The body was surprisingly light, which is in no way a bad thing. I knew going into it that the beer was only 3.8% a.b.v., but still, I’ve been drinking so many oatmeal stouts lately, I was expecting something with a bit more body.

Overall, a very solid little beer, and one worth looking for. Hopefully we’ll see it again in Memphis soon.

And a big thank you to Ivan and Yazoo for bringing some very special beer all the way down to Memphis, as well as to Local Gastropub for hosting this event.

It was my first time at Local and was so impressed, I went back this on Saturday with my wife for dinner. Thai steak and noodle salad with a pint of Steenbrugge’s tripel ... simply amazing.

Yazoo’s also got a number of events planned around the 2nd annual Cooper-Young Regional Beer Fest on October 15th. Ivan and whatever beer he decides to bring along will be hosted by Raffe’s Deli on Thursday, October 13th, and (another cask night) at Young Avenue Deli on the 14th...looks to be an excellent weekend, if you ask me.

Before I go, I’d like to congratulate Ghost River and Boscos for winning medals at the Great American Beer Festival which was held in Denver last weekend. With Ghost River won silver for their Copperhead Red in the Irish-style Red Ale category, and Boscos won gold for their Hefeweizen in the German-style Wheat Ale category. For a more thorough article on the subject, check out the FuzzyBrew blog.

Welp, that’s it for now. On the horizon for the Memphis Beer Beat, interviews with Andy Ashby, organizer of the Cooper-Young Regional Beer Fest, and Ghost River’s Chuck Skypeck, along with a few beer-centric adventures.