A coworker mentioned that the Green Beetle had recently added a portobello burger to its menu.

"Added" is relative here. The veg-friendly burger is not printed on the menu, and the first time I ordered one, the Beetle was out, the second time the waitress wasn't positive they served them. 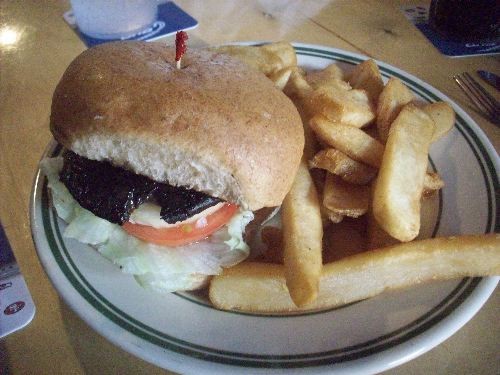 The burger was topped with a nice, thick tomato slice, lettuce, pickles, and onions and served on a toasted bun. I thought it was good. On the other hand, Greg was gaga over his Beetle Burger, comparing it to a drug. He announced the fries fantastic (and they are).

On my visit when they were out of the portobello burgers, the staff kindly pieced together a vegetable plate out of sides. One of the sides was the perfectly delicious horseradish mashed potatoes.

The potatoes made another appearance on Mike's plate. He got the special — smothered pork chop with rice, mac-and-cheese, and the mashed potaotes, which were his favorite part of this massive lunch.

All lunches, with drink, were under $10.

And, for those so inclined, Wednesday is Beer Pong Night.