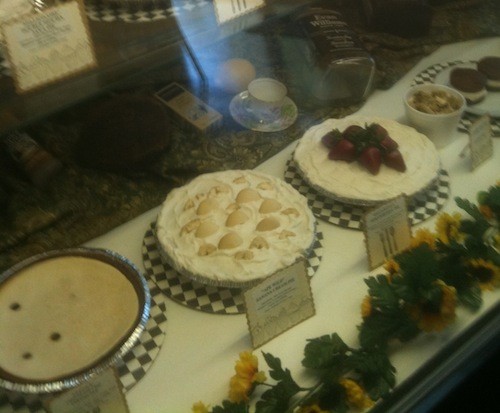 I started this post on The Pie Folks location in Germantown a little more than a month ago.

I called to get some info only to hear an answering machine message that the store was closed due to a burst water pipe.

According to owner Audrey Anderson, the damage was extensive. The Pie Folks reopened last Thursday.

Folks offers up some 20 types of pies, as well as cupcakes, cookies, and whoopie pies. They also have a small lunch menu with four types of soup and chicken or tuna salad sandwiches.

What to order was a no-brainer: the award-winning Slap Yo Mama chocolate pie, which is deeply rich and so satisfyingly chocolatey. Wonderful in every way. A whole pie costs $16.99, a slice is $3.99. (It's worth noting that The Pie Folks don't take cards for purchases under $5.)

Anderson says that they've recently added banana cream and egg custard pies. They also will continue making strawberry pies as long as the strawberries are good.