After weeks of teasers about something "neu," the mystery restaurant was revealed at a media event Thursday night.

The name of the restaurant — located in the former site of Sole at the downtown Westin — came with a dramatic unveiling of the building's sign. 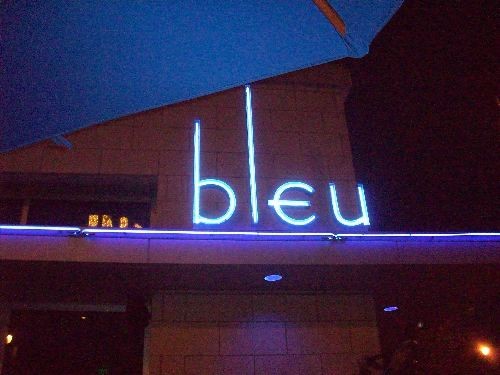 In opening remarks, Chef Robert Nam Cirillo, who moved here to head Bleu, promised a menu that is "different and new to Memphis" that will "challenge your palate."

It was really too dark to get any decent images, so I'll just share a few descriptions of what we tried. More details on Bleu in an upcoming Food News column.

We started with the signature cocktail, Bleu Steel. (And, yes, more than one person noted this is a pose from Zoolander.) The Bleu Steel is actually red and very good — worth a stop by the restaurant alone. It's a martini with thyme, blueberries, and lemon juice.

Then there was a flurry of appetizers: chargrilled oysters, Shrimp 4 Ways, a charcuterie plate, Spicy Lobster Tempura ($12-$14).

Among the salads: a fine, lemony arugula ($9) and fried goat cheese with Bosc pear ($10). The latter came with a champagne vinaigrette and inside the goat cheese fritter were cranberries. Berries appeared frequently in our dishes.

Finally for dessert it was the Grand Finale ($8).

A piece of paper is placed in front of the guest on which Chef Cirillo does a bit of molecular gastronomy art. The paper is painted with chocolate and berry coulis and topped with crystalized bacon, Oreo dust, and freeze-dried bread pudding. Very good and I liked the chewy texture of the cake.