Last Saturday morning, I had the pleasure of attend the Bluff City Brewers & Connoisseurs’ “Teach a Friend to Brew Day” in the Bayou Gill parking lot. As a part of the American Homebrewer’s Association's National Learn to Brew day, the event was geared towards those with little to no brewing experience, and the morning held demonstrations on both the relatively quick and easy extract brewing method and the more advanced all-grain brewing method, as well as a rundown on equipment, ingredients, the pros and cons of bottling and kegging, and the ins and outs of starting yeast cultures.

I’d say there was a pretty good showing, and everyone who stopped by seemed pretty keen. If memory serves, there were around fifteen to twenty folks stopped by to glean from the Bluff-ers’ wealth of brewing know-how. In addition to the heaps of info offered, our generous hosts provided some pretty mondo samples of some recent brews (including a raisin oatmeal cookie beer...which worked, strangely enough). 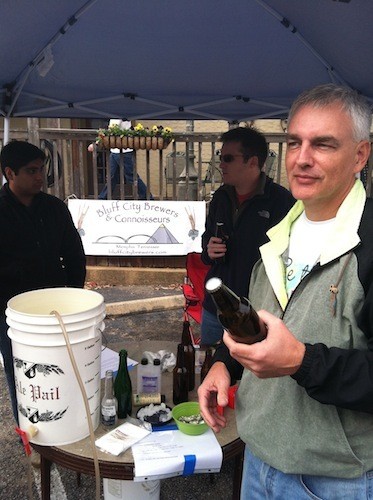 Solid advice abounded, including the general consensus among the homebrewers that beginners would do best to ease their way into the hobby/obsession with equipment and ingredient kits which can be bought at what’s now the only homebrew shop in Memphis, Mid-South Malts in White Station.

Start-up costs should be somewhere around $60-80 for everything you need to make your first 5 gallon batch of beer, and from brew day to bottling day, expect about three or so weeks before your beer is ready to drink.

Overall, it was a great way to spend the morning, and the guys and gals of Bluff City are an extremely knowledgable bunch, and from what I can tell, they’re more than happy to help newcomers to the art of brewing. I know I’ve mentioned this before, but it’s worth repeating— the Bluff City Brewers & Connoisseurs meet every third thursday at Central BBQ on Central. Check out their website for details.