As a self-proclaimed beer nerd, it’s always a delight to see new beer on the shelf. So when I walked into Joe’s Wine earlier this week, I was happy to experience just that pleasure. Considering that we’ve been engrossed by several weeks of Chuck Spypeck’s insight into the brewing world, I thought it’d be nice to take a break over a pint. And just in time for the weekend, too.

So let’s get this started, shall we?

First up is Sierra Nevada Estate. While not exactly a new beer to Memphis, Estate is released once a year so it’s been quite some time since I’ve had the pleasure of cracking one of these open. From their website:

“From our fields comes a remarkable homegrown ale, made with organic wet hops and barley grown at our brewery here in Chico and one of the few estate-made ales produced anywhere in the world!”

Pulled from the fridge in a 22 oz. bottle ordained with an illustration of what one must presume to be the mighty Sierra Nevada hop fields and topped with green wax serving to further protect (in addition to the bottle cap) the beer against oxidization, Estate Ale pours a deep amber color with creamy off-white head that quickly dissipates.

It’s aroma offers an immediate clean citrus and pine that’s seems to be common among Sierra Nevada’s line up of hoppy beers. Oranges, grapefruit, and pineapple come into play, but do so somewhat discreetly. There’s also a touch of sweet maltiness here, which helps to balance out the dominant wafting hopiness.

As with the aroma, Estate Ale tastes of citrus and pine, and there’s an initial sweep of orange juice bitterness that takes center stage at the tip of the tongue. Flowing to the back of the mouth, sweet cereal-like notes (cheerios’s, perhaps?) and some woodiness emerge and linger after swallowing.

Estate is delightfully medium bodied, glides across the tongue, and leaves with a reasonably wet finish. At 6.7% abv, there’s very little trace of alcoholic heat. Overall, I’d consider this to be an excellent wet hop ale, and at nearly $10 a pop, it should be.

Moving on to an actual brand new beer, Ruthless Rye IPA (which weighs in at 6.6% abv) is Sierra Nevada’s replacement of Glissade Golden Bock as their spring seasonal. And I’m pretty happy with that decision.
Ruthless’ aroma isn’t too far from that of Estate Ale with its strong citrus and piny hoppiness, but it stands apart by offering a degree of spiciness (presumably, the result of using rye). Though some dry and toasty cereal graininess is present to support the hopes, Ruthless is definitely less balanced than Estate.

Initially tasting a touch sweet, that’s quickly enveloped by citric bitterness and spices as Ruthless delivers the hops. Again, there are hints of some woody flavors that evolve into a slight fruity sweetness (raspberries?) on the back of the tongue.

The mouthfeel is pleasant with a nice amount of carbonation, and Ruthless offers a dry, crisp finish that leaves you wanting more. At about $12 a six pack, this is a much cheaper (and probably more accessible) option when compared to Estate Ale, and I’d say it’s very much worth seeking out.

I know next to nothing about Spanish Peaks Brewing Co. other than that it’s from King City, California, was founded in 1991. So, having never head of these guys and seeing their 22 oz bombers on sale for about $4.50, I had no choice but to grab a couple.

Their 7% abv Big Bite IPA smells pretty mildly hoppy for an IPA, but piny, mild clove notes perk up as the beer warms. There’s also some slight hints of citrus and banana (the later being a bit weird for the style, but it works).

Taste-wise, the first thing noticed is a wave of sweet malt that crests to reveal a more piny hop profile and a grapefruity finish. There’s some slight heat from the alcohol here. Light and crisp, Big Bite IPA sits pleasantly in the mouth, and as a more mild IPA, it’d be pretty easy to drink this stuff all day. Not too shabby! 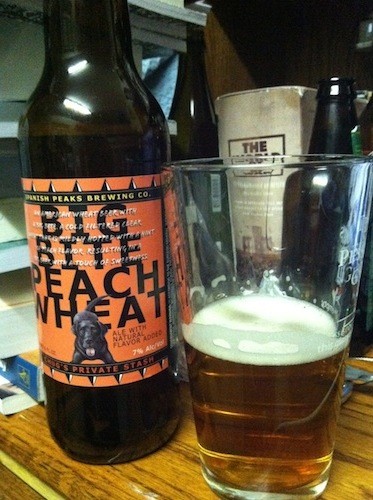 The other Big Bite, Spanish Peak’s Peach Wheat was an odd beer. Not sure if it’s a year-round brew (guessing it is as it’s showed up mid-January), but considering the style, it seems like it’d be more appropriate as a summer seasonal.

It’s aroma offers the obvious peach, but it’s more of an artificial candied peach (a la those peach gummy rings)...which isn’t bad by any means, but I was hoping for something a bit more au natural. There’s also some unexpected bubble gum notes, and Peach Wheat smells more like a Belgian pale ale than a wheat beer. Again, not bad...just surprising.

The flavor is along the same lines: peach candy (a buddy of mine who split the bottle with me said it reminded him of Snapple), and there’s some strawberry to be found as well. Though fairly mild in taste, this beer is sweet without being cloying. In terms of mouthfeel, Peach Wheat is delicately light, remarkably smooth, and hides its 7% abv beautifully...another reason this would be more suitable to a summer beer. It’s just not something I want to drink when it’s this damn cold outside.

Quickly, before I sign off: it looks like there’s a new brew group in Memphis. A homebrewing club, The Memphis Brewers Association has yet to set a date for meeting, but will be having monthly tastings at Mid-South Malts on the second Tuesday of each month. More details to follow, I’m sure.

Anyway, that’s all for this week! Cheers!