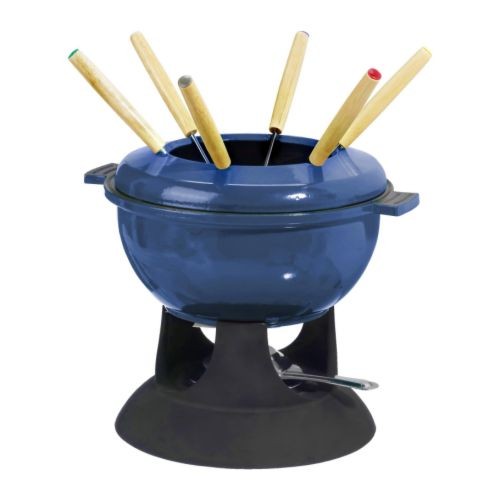 Several years ago I received an elaborate fondue set for Christmas. I could not return it fast enough.*

That was my response to coworker Michael who was telling about his new fondue set. A meal at the Melting Pot had inspired the purchase, and he was looking forward to breaking it in.

Fondue was threatening to make a comeback from its ’70s heyday a few years back, which is probably why I received the set. And it seems once fondue was mentioned, I began to see more mentions here and there.

Is fondue cycling through again?

I have to say that what Michael's come up with so far sounds fantastic. He's done sweet with chocolate and fruit, and he's made a cheese dip of sharp cheddar, Havarti, and beer to be served with bread, fruit, and vegetables.

My sister uses hers to make shabu shabu.

My mother used to have a wonderful clay fondue pot with a brass stand. I have vague memories of her using it for rotel dip. Then she used it as a planter, which looked great.

*As for me, I returned that pot because I saw it as another kitchen tool that I would rarely use, and I figured I would spare the valuable shelf space. I got in exchange for the pot a pricey Cephalon pan that I almost never use; a cookbook stand that sometimes comes in handy; and a cookbook that I flipped through, though I don't believe I've made a single one of its recipes.