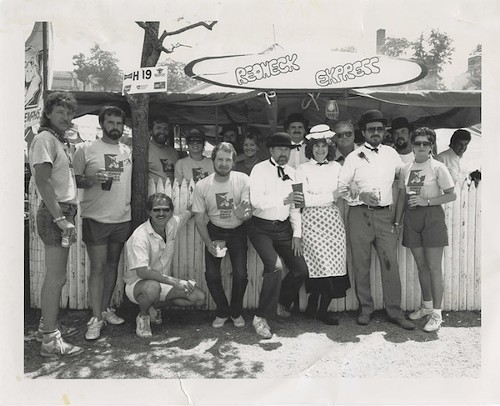 Redneck Bar-B-Q Express has been competing in the Memphis in May World Championship Barbecue Cooking Contest since the first year, 1978 (when the contest was held in a lot near the Orpheum), and they've been back every year since.

• According to team bio: "Our entry form was the first to be into to Memphis in May."
• The team name was inspired by Federal Express (now FedEx).
• The team was the first to prepare a whole hog, rather than just shoulders and ribs.
• Original team members: Pete Gross, Woody Coleman, Tommy Coleman, Mike Stals, Roy Nolen, and Mike Rivalto.

Redneck Express member Woody Coleman offers up more details on the team's 3-plus decades in the Barbecue Fest trenches ....

Your history with the barbecue contest was described to me as "antics galore." Number-one antic, the moment that lives in infamy?
Where to start? So many years and so much fun. The time we duct taped a team member to one of those old woven lawn chairs while he was “napping” from over indulging in beverage of choice. Whew, when he came to he was “pissed." Of course, we just all laughed until we could tell he was dismantling that lawn chair due to his immense strength. At one exact moment, we all ran and it took a while for him to calm down and allow us back in the booth.

Around 1986, the team acquired a 1960 Cadillac funeral hearse. It was purchased by then-team member and now deceased Stewart “Bear” Dunn. Bear had it painted fire-engine red and had red, white, and blue curtains installed inside. This hearse was used in the first two and only Porker Parades that traveled down Riverside Drive.

The hearse was driven by Ewell Weddington, the official bus driver for the team and behind it was the trailer used for hauling all of the team’s equipment. For the parade, the team members loaded onto the trailer with a street jug band from New Orleans. Because of the starting and stopping of the parade, the hearse would get overheated and would have to be turned off at each stop. Unfortunately, a battery and cables had to be [used] each time the parade resumed its forward movement. This seemed to irritate the organizers, but not as much as what happened when the team got in front of the reviewers stand.

It seemed that there was a lot beer consumed during the parade, and when the team got in front of the reviewing stand, lacking beads and tokens like the other teams, they proceeded to throw the empty beer cans toward the judges. Naturally, this did not go over very well and that was the last year of the porker parade. This was also one of many times we managed to be put on “probation” by our friends at Memphis in May

In retrospect, I feel if not being the Redneck Bar-B-Q Express, we surely would have been asked to leave. Being infamous has a positive side…

You placed 10th in the first contest. What's been the team's best performance?
First in Whole Hog the second year (1979), along with 2nd in Shoulder. First in Ribs in 1980. Many other “top ten” positions, but we do not count them. When MIM went to single entry category, we went with Whole Hog since it was our beginning. We are also the only team to consistently enter the whole hog category…

Biggest change in the contest that you've seen over the years?
The change that has had the most impact on the competition was the allowing of the “commercial ovens” into the competition. We have defended the old fashion method of barbecuing for years and still do. There are MANY people that can cook world class barbecue without all the expensive toys.

Word of advice for the newbies?
#1: Place creativity and fun at the top of the list — it’s a Redneck thang that all enjoy.