The Politics of Barbecue: A Novel 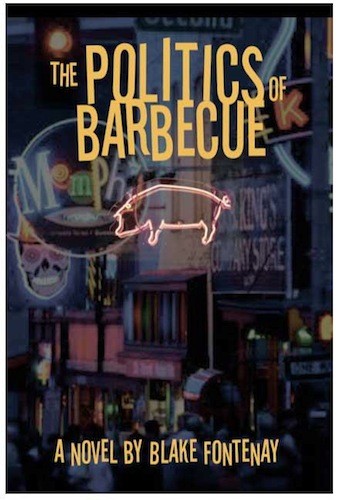 Due for release this September: The Politics of Barbecue, a novel by former Commercial Appeal staffer Blake Fontenay.

Barbecue and politics have one thing in common: both can be messy. And nowhere is barbecue more famous or politics more strange than in Memphis, Tennessee.

Pete Pigg is the owner of a popular Beale Street restaurant, the Pigg Pen, where customers ogle the "Pigglette" waitresses and toss gnawed-on pork bones into strategically placed buckets. Thanks to a quirk in the city's election laws, Pigg has managed to get himself elected mayor by campaigning in quilt-patched overalls and using schmaltzy slogans like "Nobody knows how to cut pork like Mr. Pigg."

But Mayor Pigg is no rube. He's now firmly in control of city hall and up to something sleazy. When he announces plans to build the World Barbecue Hall of Fame in Memphis, it sounds good, but something unsavory lies just below the surface.

It's up to an unlikely crew consisting of a cynical public relations man, a famous actress who's smarter than the roles she plays, a feisty female lawyer, an Elvis "tribute artist," and a crossbow-toting hermit to expose the truth.

As the story moves past Memphis landmarks such as Beale Street, Graceland, and Mud Island, the unlikely group of heroes gets a glimpse into the greed and corruption all too rampant in government.