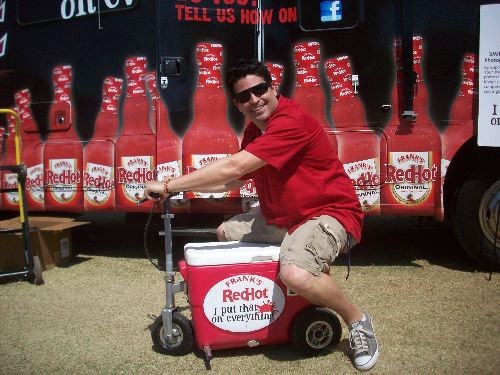 Smack dab in the middle of the ocean of barbecue currently covering Tom Lee Park is a small island (to torture this metaphor) devoted to Buffalo chicken wings.

The wings come with the Frank's To the People bus, sponsored by Frank's RedHot sauce. The bus is traveling the country making stops at contests and festivals just like the World Championship Barbecue Cooking Contest in order to spread the gospel about two Frank's products: the Sweet Chili sauce and the new Thick sauce.

So about those wings at a barbecue contest ...

Restaurateur, cookbook author, one-time host of TLC's BBQ Pitmasters, and Frank's pitch man Kevin Roberts sees it as enjoying basketball while enjoying football. It's all about sports, and here at Barbecue Fest, it's all about food.

Roberts owns East Village Tavern & Bowl as well as other restaurants in San Diego. He's opening another restaurant in New York City and is a consultant for Yankees Stadium.

"I'm a condiment-type guy," says Roberts, who notes that East Village's biggest seller is the Tavern-style wings, which are covered in a sauce made with Frank's RedHot and Cattlemen's barbecue sauce.

Roberts' approach to wings: boil, grill, sauce. He boils them first in beer, grills them, and then sauces them. "It's really easy," he says.

At the Barbecue Contest, Roberts is emceeing Frank's hot-wing eating contests. Fastest eaters win $100, and, says Roberts, a kiss from him.

"It's me and my bullhorn. I harass everybody," Robert says.

Roberts notes that folks like Frank's because it's not so hot as to kill the flavor. The new Thick sauce, being billed as an "adult ketchup," makes a good topping for burgers, and Roberts likes to add in Ranch dressing to the sauce for a dip. "I don't mess around!" he says.

Next up for Roberts and the Frank's To the People bus is a rib cook-off in Cleveland, Ohio.

As for Memphis, Roberts says he hasn't seen much of the city beyond Tom Lee Park. After the Barbecue Contest shut down for the night on Thursday, Roberts headed straight to his hotel and ordered a dinner of Brussels sprouts and white-bean hummus.