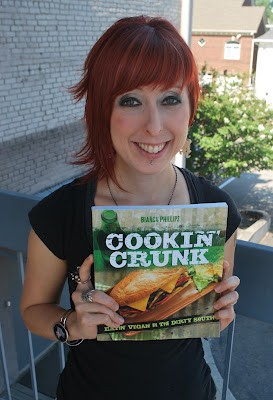 Bianca Phillips* is associate editor at the Flyer and author of the hugely popular food blog Vegan Crunk, her no-animal-products ode to the Southern comfort food she ate while growing up in Arkansas.

Next month sees the release of Bianca's first cookbook, Cookin' Crunk: Eatin' Vegan in the Dirty South featuring 140 or so recipes that pass the "crunk" test — what Bianca defines as having fun while showing pride and passion in her approach to Southern cooking.

So ... you've got your blog Vegan Crunk, the "vegan" tattoo on your wrist, and, now, you have a new cookbook, Cookin' Crunk: Eatin' Vegan in the Dirty South. What's your point?
I'm hoping to show people they can still enjoy classic Southern soul food without the ham hocks and bacon grease. Not only are my vegan recipes healthier than their meat-laden counterparts, but they're also kinder on the animals and the Earth. There are recipes for country fried tempeh steak, whole wheat buttermilk biscuits and chocolate gravy, a tofu chicken wafflewich with maple-dijon sauce, vegan ranch dressing, slow-simmered collard greens, peanut butter and banana "Elvis" cupcakes, and chocolate pralines to name a few.

You claim you can veganize anything. What's your proudest vegan achievement?
That would be my Deviled Tofu Bites. They're a vegan version of deviled eggs, and they taste exactly like the real thing. The secret is black salt, an Indian spice that taste like eggs. The base of the tofu bites is made with extra firm tofu, and the yellow "yolk" part is made with silken tofu, white beans, black salt, mustard, vegan mayo, and spices blended in a food processor.

Last February, when Cochon 555 was here, you posted something about a "pig murder fest" on your personal Facebook page, and someone complained to our boss. Any thoughts on the upcoming Cochon Heritage BBQ?
Sounds like another pig murder fest to me. Pigs are highly intelligent animals that form bonds with other pigs. Animal behavior researchers have found that pigs are smarter than dogs and even three-year-old kids. Would you eat your dog? Or your kid? Yea, I didn't think so. It amazes me how people can eat other sentient beings with a clear conscience.

What's your favorite thing to eat in Memphis?
Just about anything from Imagine Vegan Cafe, but if I had to pick a few, I'd say the French dip sub, the macaroni and vegan cheese, and the country fried steak. Other faves includes the vegan tacos from the Fuel Cafe food truck, the eggless egg salad sandwich at Three Angels, BBQ tofu at Deja Vu, the vegan cheese pizza at Trolley Stop Market, and the lunch buffet at Pho Binh. When I'm feelin' healthy, I like the Chocolate Covered Almond smoothie at Cosmic Coconut.

What's next?
I'm currently working on a book of veganized trendy food throughout the last century. It's organized by decade, starting with 1900 and going through 1990. There's stuff like pineapple upside down cake from the 1920s, tempeh Wellington from the 1960s, vegan cheese fondue from the 1970s, and even sushi from the 1990s.

Cookin' Crunk is currently being sold via Vegan Crunk and by pre-order on Amazon, and will be available soon at Whole Foods and the Booksellers at Laurelwood.

*Yep, writing about a coworker is a conflict of interest. What can we say? We're thrilled about the book and she brings treats to the office.