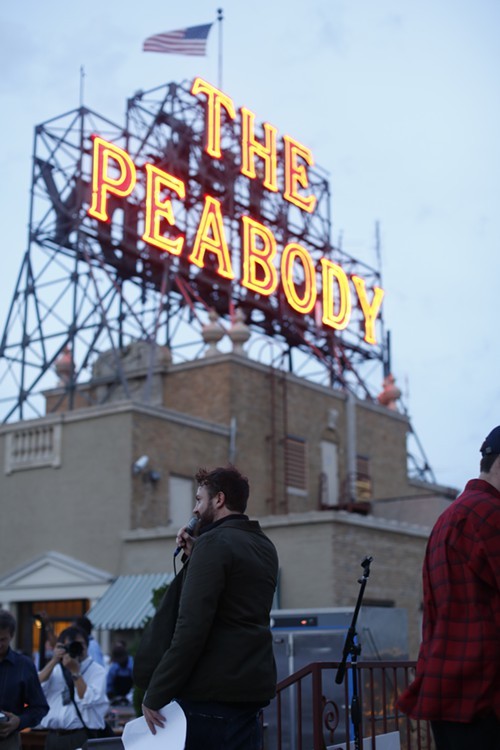 If ever the weather gods looked favorably upon an event, they blessed last night's Mixologist Rooftop Soiree. The kick-off party for the Cochon Heritage BBQ weekend, was surprisingly spared the torrential rain that hit a few hours later, and enjoyed a continuous breeze (er, wind) that wafted the smell of pork and bologna and bourbon all across the Peabody Rooftop.

A square-shaped bar of twenty local mixologists serving up bourbon-based cocktails sat smack dab in the middle of the rooftop, surrounded on all sides by local restaurateurs with their own pork-based concoctions. A bologna contest drew voters to the blind tasting table, where pieces of bologna were available for sampling with none other than sliced white bread. (Is there a more appropriate way to eat bologna?) La Divisa Meats out of Philadelphia won the people's choice award; Travis Grimes won the judge's contest. 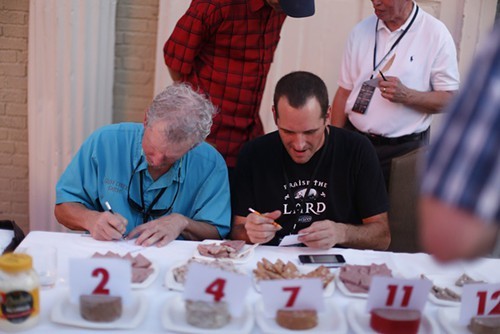 The mixologists were culled from some of the top bars and purveyors in Memphis. Michael Hughes of Joe's Liquor crafted his bourbon drink, "The Breakfast," with Benton bacon bitters, Prichards bourbon, sarsaparilla syrup, and sorghum molasses. Leo from Felicia Suzanne's came out with a sparkling Old Fashioned, made with bourbon, orange bitters, prosecco, and orange simple syrup and Bing cherry juice. Evan from The Cove was serving up Hirsch bourbon with pure cane brown sugar, lime juice, and a touch of water. And pouring one of the most interesting drinks of the evening, Chris from Sweet Grass mixed Eagle Rare bourbon with black raspberry dijon mustard, lemon juice, Dolin light vermouth, and ginger ale.

A number of stations offered pork renditions from a variety of Memphis' culinary cognoscenti. Las Tortugas served a guacamole with crispy pork; Interim served a number of items throughout the evening, including a chopped pork shoulder with light vinaigrette and mustard greens; Acre offered up hog head and ham in a pretzel roll with fennel apple mustard garnish; Lunchbox Eats had its coconut lemonade to wash down the fig-smoked, beer-braised pork hock sandwiches topped with green tomato chow chow, veggie slaw, and cornbread toast. At some point, I had a chocolate truffle topped with crispy fried pork skins, and though I'm not sure I know how it wound up in my hand, I'd like to buy that chocolate fairy a drink. Probably something with bourbon.