Anthony Bourdain at the Orpheum: Guts & Glory, Some Leftovers, and a Super Fan 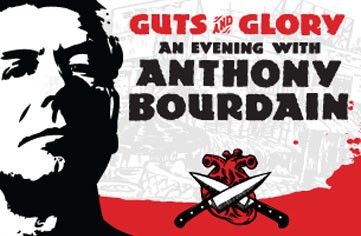 The nearly full house at Anthony Bourdain's Guts & Glory show at the Orpheum Friday night was made up of many, many hardcore fans — folks who most certainly know Bourdain's No Reservations TV show and his books Kitchen Confidential and Medium Raw chapter and verse.

Indeed, the show Bourdain dished out could be viewed as reheated leftovers. Or, it could be seen as something of a greatest hits: chapters from Medium Raw reproduced just about intact, clips from No Reservations, and barbs flung at familiar targets (Paula Deen, vegetarians, Olive Garden, etc.).

But the energy from the crowd was high, and Bourdain met expectations with a sharp, often bawdy approach. Among the highlights: the bit about how to do drugs on television and the one about being a gracious guest (that means eating a poop- and hair-covered warthog's anus).

The real unknown of the evening came with the audience and the concluding Q&A session.

He was asked how he learned to write and about the NYC restaurant he left when he became famous. A shout-out was given to Vassar (which he attended briefly), and he promised that he would give Memphis barbecue its proper due when he begins his new show for CNN next year. (No Reservations ends its run on Monday night.)

The show was ended when Bourdain laughed and waved off the last question posed by a super-pumped fan.

The man asked, "Who do I have to fuck to get a drink with Anthony Bourdain?"

Did you go? What did you think?