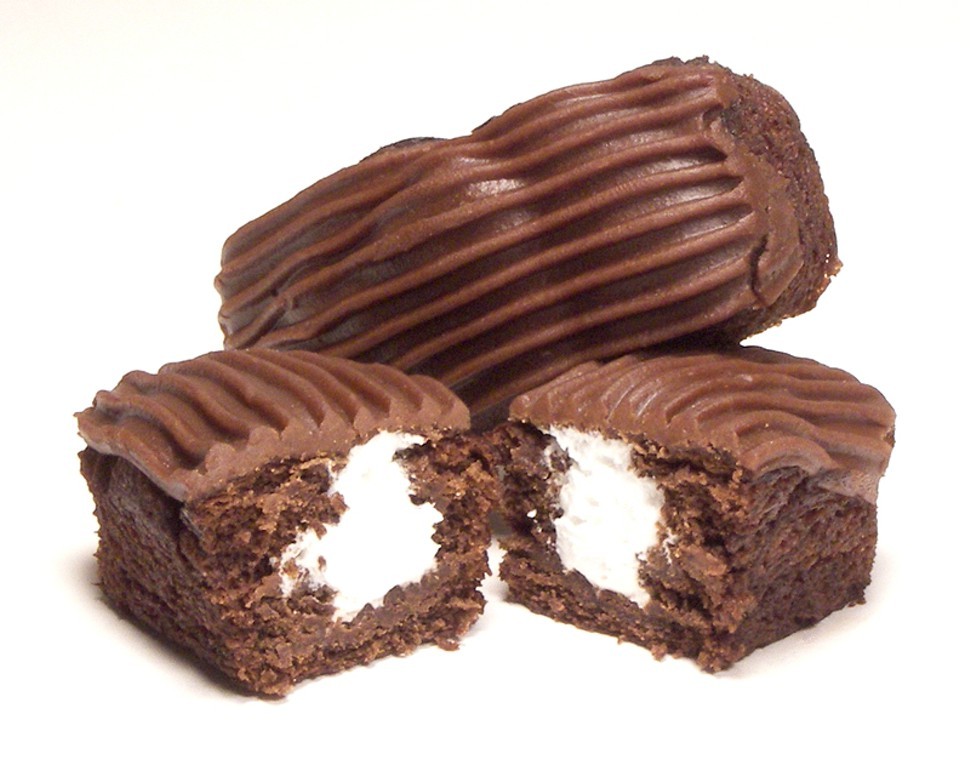 Go here to read Part I of The Great Hostess Taste Test, in which:
It was revealed that taste tests are our jam.
The nerds assembled and held a seriously scientific reckoning of which is the best of the brand's snack cakes (Nate Silver, eat your heart out.)

On part two, we wrap up the judging by dissecting and discussing Sno Balls, Suzy-Q's, and Zingers. Who will win? Watch the award-eligible video at the end of the post to find out!

Taste: 1.83
"Tasted like chocolate rubber filled with cream."
"even worse than I could have imagined"
"not a food substance"
"tastes like nothing but icing"
"coconut as dreamed up by an imbecile"

Overall: 2.75
"What a let down! In the words of Cher from Clueless: 'It's a total Monet: It looks ok from far away but up close it's a big ol' mess.' "
"Looked wonderful like snow but tasted DISGUSTING! Looks like you lifted up an old wooden porch board to find maggots. NASTIEST THING EVER!!!!"
"Would have scored higher, but your'e not supposed to eat snowballs that are brown in the middle."
"looks can't overcome the tongue"

Presentation: 4.00
"They don't look too desirable."
"smoooooooshed"
"creamy filling leakage is not tempting"
"Named after Dale Hawkins' famous rock-and-roll song?"
"Clever name, but who the hell is Suzy Q?"
"Smashed and gross. Why do I want to eat this?"
"squished"

Color Appeal: 3.14
"a little dark and gloomy"
"natural chocolate color"
"brown, brown, brown"
"looks too much like a Zinger"
"Not appealing — even inside packaging it looks sticky and nasty. And if you want a 'cream' filling, eat a Twinkie."
"Brown as the gloaming of man's soul."
"NASTY!!!!! Never would I ever eat it."

Taste: 5.57
"tasted the total opposite of what they appeared"
"a poor man's Zinger"
"slightly better than a Zinger"
"not so horrible"
"Stale. Wanted to rinse out my mouth."
"Good, working class chocolate. Sharp and tasty."
"not a Zinger"

Collectability: 3.67
"Who gives a shit about these?"
"They seem like they could get stale."
"Record nerds might collect these?"
"Let them die."
"Ain't gonna survive the Mayan apocalypse. Squished already and haven't even tried."
"Nothing special and squishes easily."

Overall: 5.79
"The black sheep of the bunch. It's presentation didn't fill me with the urge to try them, but when I did, I enjoyed them."
"Poor man's Zinger."
"Not very good."
"Probably only the 2nd time in my life I've had these. I could have stopped at 'one and done.' Yuk."
"disappointing"
"Poor man's Zinger. [that got said a lot by the judges]

Presentation: 4.29
"look like an interesting block of three cakes"
"Sticky? Smooshy?"
"Seems normal enough."
"What is a 'Zinger.'"
"squished but approachable"
"turd-like"
"brown isn't as appealing as the yellow version"

Texture/Tactile: 6.43
"feel pretty soft and inviting"
"Like real cake! Kinda!"
"brownie-like"
"also seems like I'm eating a tire"
"firm but spongy"
"Cake! Moist."
"As clammy and sticky as I thought it would be."

Collectability: 6.00
"zzzzing!"
"I'd be a hoarder for these!!! Who needs Twinkies when you have Zingers?!?!"
"Feed them to your kids when they are bad."
"If I were forced to buy one Hostess item, it probably would be Zingers."
"Yellow ones, yes! Chocolate, not so much."

Overall: 6.50
"Looked, felt, and tasted decent. I choose the Suzy Q's over them, however."
"Simply the best. Better than all the rest."
"NOM NOM NOM NOM"
"Unless serving as some form of punishment, I can not suggest eating or giving this to anyone."
"above average"
"They kept reminding me of things I find in my backyard with my pooper-scooper."

And now, ladies and gentlemen: The Great Hostess Taste Test Results Show! Watch it! Watch it! Yo, Indie Memphis Film Festival: I think you have a winner for next year's Best Documentary Short Hometowner Award.

In Memoriam: Five minutes after this film was recorded, Flyer senior editor and Hostess judge Michael Finger passed away due to severe gastric distress. Godspeed, you sweet sweet man. Your death was not in vain.

Michael wrote the name of his killer — Suzy Q — using the chocolate icing on his fingers. A warrant is out for the suspect's arrest.