Passport to Oregon, Plus More for Your To-Do List 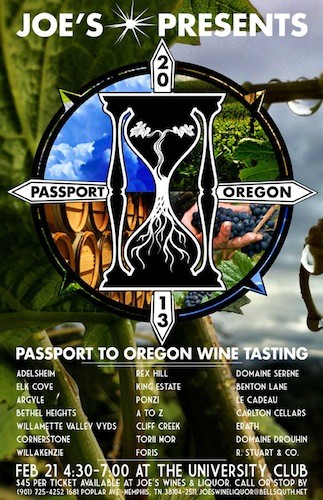 • Joe's Wines & Liquors' 2nd Annual Passport to Oregon Wine Tasting isn't until February 21st, but you'll want to secure your tickets today, as the first year's event was a sellout.

The tasting highlights the wines of Willamette Valley. Among those scheduled to appear are Michael Adelsheim of Adelsheim Vineyards, Adam Campbell of Elk Cove Vineyards, and Rob Stuart of R Stuart & Co. Winery.

The business, at 800 S. Cooper, sells grab-and-go items, such as hummus, soups, sides, entrees, and more. The open house will include samples of the food and wine.

• On Saturday, January 12th, 3-5 p.m., the Booksellers at Laurelwood will be the site of the latest Memphis Cash Mob gathering. The beneficiary is Project Green Fork.

The goals of the Memphis Cash Mob are simple enough: support local businesses and get like-minded folks together.