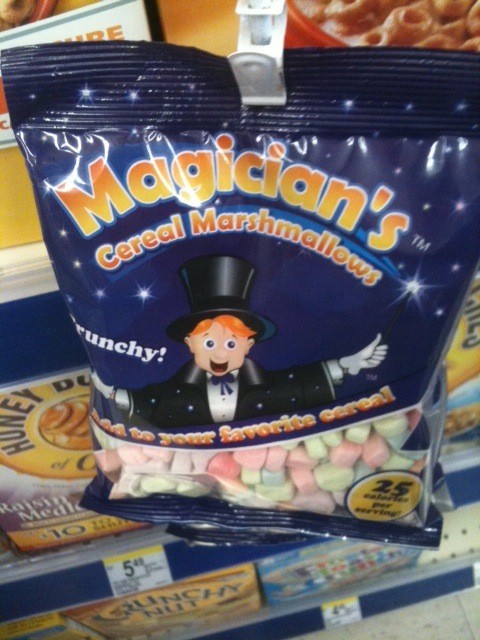 There are those among us who approach a box of Lucky Charms like anthropologists, carefully combing the cereal to unearth the treasures of dehydrated marshmallows.

Those folks are the target audience for Magician's Cereal Marshmallows, which is 100% marshmallows with none of the cereal.

The product was launched in 2010 by Germantown resident Craig Rich through his company CMRI. Last spring, Rich scored a deal with Walgreen's that placed Magician's Cereal Marshmallows in stores nationwide.

Rich says he got the idea for Magician's from his daughter's best friend, who would remove all the marshmallows from Lucky Charms then throw away the rest of the cereal and buy another box. "I did research and found out lots of people do this," Rich says.

Rich has a background in the food industry, with jobs on the factory floor to those in logistics and marketing. These were "business to business," he says, while Magician's is his first go at "business to consumer."

In studying kids' cereals, Rich noticed that they all had characters, so he came up with the magician for his marshmallows and had a local artist create the design. The chin line of the magician is that of Rich's daughter, the magician's hand holding the wand is the artist's own hand.

He got the product into stores and online. Magician's is sold on Amazon. Crunch Mallows — the same product branded for the candy aisle — has sold well through ThinkGeek. Magician's has also made its way into England via American Sweets.

Rich struck the deal with Walgreen's during last year's Sweets & Snacks Expo in Chicago and the product hit the shelves last November. The deal has a sell-by date, however. Eighty percent of the bags must be sold by February 14th in order to remain in the stores.

In regards to Lucky Charms, Rich says that proprietary claims apply to the shapes of the hearts, moons, etc. (Magician's shapes are mostly triangles and squares) and not in the actual marshmallows.

Rich says he has not been contacted by anyone from Lucky Charms. "Not yet," he says. "I figure some day I will."