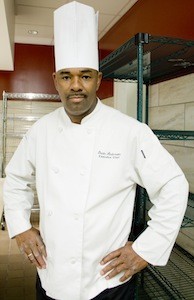 Then there's the Kroc Cafe with sit-down dining for 35, concession stands, and room for classes. The Kroc Cafe provides catering services as well. Overseeing it all is executive chef Quan Anderson.

Anderson is a native Memphian, and he's been cooking a long while, set on the path at the age of 17, when he was on the cusp of dropping out of his tech high school. An instructor convinced him to stay and Anderson liked the school's cooking program.

Anderson has worked in New York and Missouri. He was the Peabody hotel's banquet chef. At some point, he began incorporating his faith into cooking. He taught kids in a culinary outreach program to cook dishes made with food mentioned in the Bible. He's been putting together a cookbook that connects the dishes with scripture.

And now it's on to the Kroc Center, where he designed the menus for the cafe as well as the one used for catering and heads a staff of four (though he says that number may expand).

Members can grab a granola bar or yogurt to fuel a morning workout, or take a vegetable cup to-go to eat later. There are weekday edible themes like Monday's "Build Your Own Salad" and Wednesday's "Comfort Food."

Among the classes set so far are "Adult Beginner Cooking," March 9th-May 25th, which covers everything basic cooking techniques to knife sharpening. There's also "Couples Cooking," April 13-27th, for which participants learn to design a menu. (Classes are open to the public, with Kroc members receiving a discount on class fees.)

It cannot go unmentioned that the Kroc Center is funded by wealth created by McDonald's. Anderson, for one, does not have a problem with people eating McDonald's. His goal is to shed light on healthy alternatives, like creating a burger patty with less fat.

Anderson acknowledges that things have been hectic getting the Kroc Cafe ready for its debut on Saturday.