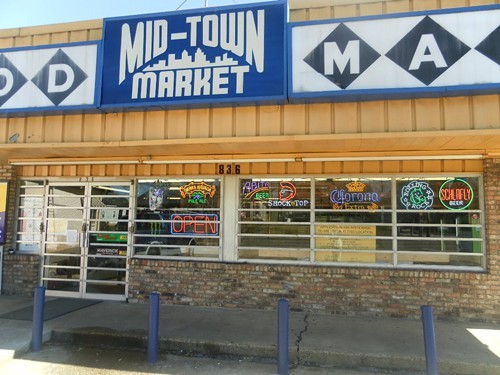 In January, the Commercial Appeal ran a feature on Midtown Market about new owner Kevin Park's efforts to convert the admittedly run-down convenience store on Cooper into a grocery store offering local items and produce.

Park attended a Cooper Young Community Association meeting to introduce himself and to assure everybody of his commitment to being a good neighbor.

But, it appears that not everyone is convinced. On February 20th, Midtown Market's application for a beer permit was "continued" by the City of Memphis Alcohol Commission after commission member Billy Post, who owns Basil Bailey Salon in Cooper-Young, raised concerns about the market.

Specifically, Post is concerned that Park and his wife Soojin are the new owners in name only as an attempt to evade further legal trouble for selling alcohol to minors.

One point of contention centers around a point-of-sale cash register, which requires that info from an ID must be entered for a sale to continue. While not mandatory, it does help a business make its case for obtaining a beer permit.

Park says he has purchased a point-of-sale cash register.

In response to the February 20th continuance, Park has put a petition in his store seeking support. As of Tuesday, that petition had around 200 signatures. He says that a post on the market's Facebook page about the situation has gathered a lot of interest as well. It reads:

We are sorry to inform you that our beer permit hearing has been rescheduled to March 6th.

Our hearing on Feb. 20th was rescheduled because one commissioner, a resident of Cooper Young, feels that selling beer at Midtown Market is harmful to our community.

We couldn't disagree more.
We have taken extensive steps to make our store healthier, safer, and better for our community.

We need the support from the community more than ever. We need letter of support to submit at the hearing, signed petition, and supporting members of community at the hearing.

The Cooper Young Community Association has written a letter in support of Midtown Market.

Post of the Alcohol Commission says that he's looking at the matter not only as a commission member but as a business owner. He does not want to keep Midtown Market from having a beer permit. He simply wants the owners to follow the law, which means always checking IDs for alcohol purchases. He says he has bought beer from the market himself in the past and not been asked for an ID.

Whether Park's petition, point-of-sale cash register, and call for support will help his case to get a beer permit remains to be seen. The next meeting of the Alcohol Commission is March 6th.

Between now and then, Midtown Market will be visited by Aubrey Howard, executive secretary/administrator of the Alcohol Commission. He will then deliver a report to the 9 members of the commission.

If the board members decide not to issue the permit, the Parks can contest the decision in court.