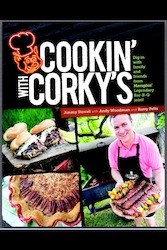 • The new Kroger at Poplar Plaza is set to open Wednesday, March 20th.

• Midtown Market got its beer permit approved Wednesday morning by the City of Memphis Alcohol Commission after its first attempt was rejected.

• A sign on the door of Sharon's Chocolates & Bread reads: "Sharon's will be closed until March 11th for renovations - opening for chocolates and coffee bar." Attempts to reach the owners were unsuccessful.

• Cookin' with Corky's, featuring 165 recipes from the BBQ powerhouse, debuts on QVC on Sunday, March 10th, 11 a.m. It will be in bookstores May 1st.