It's All About Boiled Peanuts

When I read about Hog & Hominy converting its patio area into a bar with a menu serving only oysters, burgers, and boiled peanuts, my first thought was, Memphis is saved!

Now that I look back on John Branston's 2011 post 50 Little Things for a Better Memphis, I see that my memory may have inflated the importance put on boiled peanuts.

I'm not a fan, but an informal survey around the office reveals that I'm in the minority. Bianca has a recipe in Cookin' Crunk, another coworker makes a batch once a week for her girls' night. 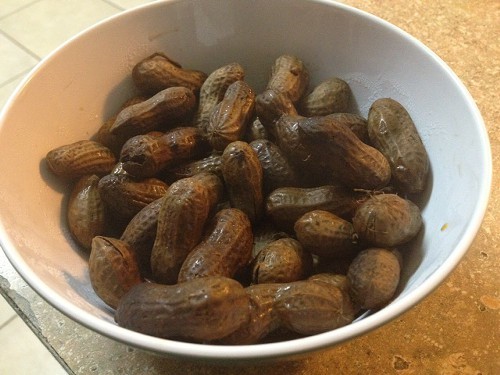 Larry Duncan is in charge of Paul Daddy's Millington operation. "I got into it an odd sort of way," says Duncan, who retired from Dupont after 37 years. He, with a "semi-partner," took over the business a couple years ago from the original Paul, who he describes as his "husband-in-law" (Paul is married to Duncan's ex-wife.)

Paul Daddy's sells regular and Cajun flavor for $5 for a quart bag. Duncan starts each batch on Thursday morning, beginning a 36-hour process that begins with brining green peanuts for 24 hours and then boiling them in 25- and 30-gallon pots over propane burners for 12 hours.

Duncan says he raised the price from $4 to $5 a year ago after bad weather and other factors saw raw peanut prices soar and availability shrink. Duncan drives to Birmingham, Alabama, to get the peanuts. (Duncan says he thought about charging $4.50, but he didn't want to mess with quarters.)

Duncan says they'll sell anywhere from 20 to 40 bags at the Millington market and between 75 to 125 bags at the Agricenter.

Duncan, who has cooked on competitive bbq teams, first tried boiled peanuts only a few years ago.

"I've developed a taste for them," he says.