I've mentioned before that I'm a sucker for packaging, so I was all over # pound cakes, which I picked up last week at Miss Cordelia's.

# pound cakes founder Judy Douglass started baking cakes and selling them to friends several years ago when she was a stay-at-home mom. She says both her grandmother and mother were excellent cooks. "If there's a cooking gene," she says, "I must have it."

Her friends, the folks behind Tom's Tiny Kitchen Pimento Cheese, suggested she get her cakes into High Point Grocery and Miss Cordelia's. # pound cakes have been at High Point since February; they made their debut at Miss Cordelia's 2 weeks ago. 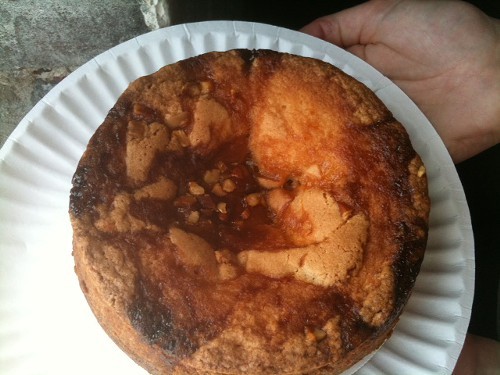 I bought the apricot-almond cake (above). The cake itself is richly moist, the caramelizing of the apricots a crowning touch. The other flavors include: blackberry-almond; cinnamon-pecan; raspberry-almond; and peach-cinnamon.

The 6-inch cakes, sold at High Point and Miss Cordelia's, are $14.99. Douglass also sells each flavor in full-size 18-inch cakes for $35 (contact her at judypoundcakes@gmail.com for more information).

I spoke to Douglass just as she was packing up cakes for today's tasting at Miss Cordelia's. She had just finished up an order for some 2 dozen small cakes and five bigs one to send across state.