On Tuesday, May 14th, 4-6 p.m. at the downtown Central BBQ, there will be a party celebrating the release of The Southern Vegetarian, the new cookbook by Amy Lawrence and Justin Fox Burks, the couple behind the wildly popular blog The Chubby Vegetarian.

Lawrence and Burks are longtime Flyer friends. Lawrence is a teacher and writer who just won Memphis magazine's Fiction Contest for the second time. Burks is a talented photographer whose work has appeared in many publications, including Food + Wine and Garden & Gun.

When you first started The Chubby Vegetarian blog, you resisted including recipes. Why?
AL: I think we didn't really know how to write one back then! Since that time, we've learned more and figured out how you have to picture the steps and also try (before things are final) to see how they could be misunderstood because the main goal is to make them really easy to follow and clear.

JFB: We were just sharing how we cook; we started TCV in 2008 as a photo blog just to document the things we were doing in our own kitchen. We had no intention of going through the trouble of writing recipes. More and more people started asking for the recipes, so that's really the only reason we ever started including them! We're really glad they asked...

Amy's the baker; Justin's milieu is the savory stuff. Tell me about the division of labor. Any butting of heads?
JFB: Never. Amy makes great savory food as well, and I love it when she cooks dinner for me if I have to work late on a shoot. The division of the sweet and savory stuff is really just how things worked out from the start. It just works best with our personalities. I'm the kind of cook who can open up the fridge and make something out of what's there. I don't need a plan, but Amy's more of a planner. You can't bake without a plan.

AL: I'll help out as Justin cooks, but I prefer not to be the one taking charge of all the details of what's for dinner. I will think about a new dessert for weeks, just going over what I want to do and why, and then when the time is right, I give it a shot.

We'll discuss recipes, what did and didn't work, but we do that fairly dispassionately; we just try to figure things out and make them good. The other day, my allergies were on full attack, so I wasn't up to baking, and Justin made a salted peanut butter tart for a brunch we were going to. He worked on Saturday morning, and I made orzo with tomato jam and arugula for lunch. In a pinch, we can switch things up. I am experimenting with making healthier desserts these days — but am also branching out into salads.

The book's title is The Southern Vegetarian: 100 Down-Home Recipes for the Modern Table. There are recipes for collards and a vegetarian version of chicken and waffles, etc. But, I think the most telling word in the title is "Modern." Can you tell me about how you approached assembling the recipes? The idea you wanted to convey?
AL: I think it's good to get to a place where the Southern food you like to eat isn't all indulgence but can help you to be a little healthier. Making some changes is good. I love to eat; a good deal of my life used to revolve around that. Now I understand that you have to do the indulgent stuff on occasion and fit in your whole grains, fruit, and veg most days. It doesn't have to be boring, though. Everyone I know is trying to figure out how to eat better these days. Modern Southern food is developing as an answer to that.

JFB: What I think of as modern food now is a lot like the classic way of eating in the South: lots of vegetables supplemented by a little protein.

Not a lot of people know that you, Justin, have a fascination with taking images of meat in its rawest form — pig carcasses and the like. What's your problem, man?
JFB: I'm not drawn to photographing meat specifically, but am certainly fascinated by the whole process of cooking of general. I learn so much by watching my friends who are restaurant chefs tear it up in the kitchen. I'm constantly in awe. I don't see it as separate! Cooking is cooking, and creativity is creativity. I guess I see through my personal preferences and concentrate on the art of cooking. 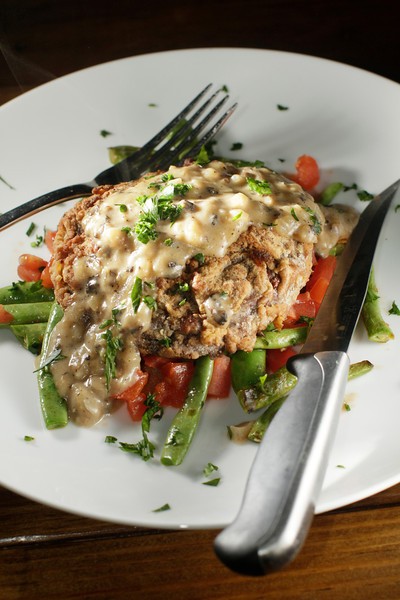 What's next for The Chubby Vegetarian?
AL: I have plenty of dreams about who might discover our recipes and want to cook with us, but I also think a lot about community outreach involving food in the future. Maybe that's because through the blog and our cookbook, I have met (and even cooked with, on occasion) so many warm, talented, super-friendly people. I think there is a real sense of change brewing in the Memphis food scene. What's going on here is not what people on the outside of our city might expect.

Overall, it's my love of home cooking that drives me to work hard on TCV — the potlucks and grilling out and picking berries and vegetables and herbs and stuff — and just sitting around with family and friends on a plain old weeknight or on a special holiday. Cooking and sharing a meal have always been so relaxing to me. I hope we can help other people feel that way, too.

JFB: Our mission is not to try to turn the whole world into strict vegetarians; we think that the more fresh, seasonal vegetables people eat, the less other stuff they'll have room on their plate to have. We're going to continue convincing people to eat their vegetables, and there are hundreds of recipes we've been thinking about for other books in the future. Like my friend Kelly said to me on a run the other day: "You ain't nothing but ideas." I took it as a compliment!