John Willingham: "I believe in the freedom of barbecue." 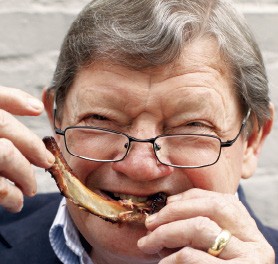 Barbecue legend John Willingham passed away on Wednesday just as this year's Barbecue Fest was kicking off. He was 80.

Willingham was a politician, a restaurateur, an inventor, a multi-prize winner at barbecue cooking contests, a champion of all things barbecue.

Back in 2009, Willingham spent a memorable afternoon at the Flyer, guiding the staff through the finer points of 'cue for the paper's annual barbecue issue.

Willingham preached the gospel of the rib, which has five basic tenets: appearance, aroma, taste, chewability, and memory. On barbecue sauce, Willingham said, "Generally speaking, people cover up that which you love to see — it's like a woman wears a dress." And the congregation (well, some of us), replied, "Amen."

Of barbecue judging, Willingham said, "We wanted to make it formal but with an element of freedom. I believe in the freedom of barbecue." 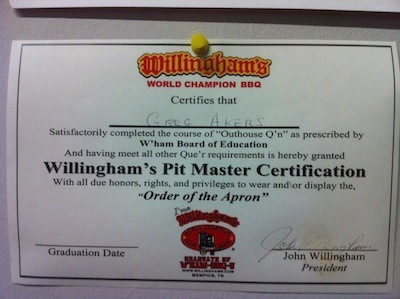 At the conclusion of the day, Willingham bestowed each of his students with an Order of the Apron certificate, sealed with a greasy, sauce-stained thumbprint.

Modernist Cuisine: "I needed to have one those cookers."

Willingham inducted into the Barbecue Hall of Fame.