Oooo... Look at the Mayor Talking Trash about Texas BBQ 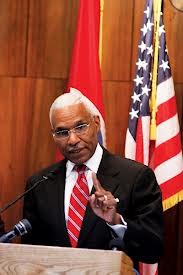 So ... earlier this week, San Antonio mayor Julian Castro made a barbecue-centric bet with mayor A C Wharton in recognition of the Grizzlies-Spurs series.

My favorite thing about all this is not the wager, but that the mayor's office sent out a press release about the wager.

Included in the release is this addendum from Wharton's Facebook page:

“I should mention that I have a friendly wager going with Mayor Julian Castro of San Antonio on the Grizzlies/Spurs series. The losing Mayor must send BAR-B-Q from one of their city's best BAR-B-Q restaurants to the winning Mayor. Mayor Castro proposed it, but it seems a little backward. In my opinion, I should be forced to eat second-rate Texas BAR-B-Q as punishment not when we are successful!”

Seriously, this is a valid point.

The barbecue involved in the bet is San Antonio's Granary 'Cue & Brew and Memphis' own Rendezvous.

According to this story from the San Antonio Current, the bet was the suggestion, via Twitter, from Texas Monthly's @tmbbq.

From the press release comes the email exchange between Castro and Wharton:

While everyone knows the best BBQ and basketball comes from Texas, how about a friendly wager on the Spurs-Memphis series? If the Spurs win, I'll "settle" for Memphis' best BBQ. If the Grizzlies happen to win, you can see what you've been missing in terms of "real" BBQ. I'll send you some of Texas' finest from The Granary 'Cue & Brew.

Good luck in the series. Look forward to hearing from you.

I appreciate the kind invitation, and I accept your challenge. The Spurs are a great team, but I am confident that the signature "grit and grind" of our Memphis Grizzlies will prevail in this hard-fought series.

Barbeque is a religion in Memphis. People from everywhere make the pilgrimage here during our Annual Memphis in May Barbeque Fest. And, we are home to many of the world’s great barbeque restaurants where smoke stacks are raised like steeples.

When the Grizzlies win, I will expect some of the Texas-styled barbeque you've referenced. If the Spurs happen to win the series, I will send you some of our World Famous Rendezvous Barbeque.

Be well and I hope to see you soon.