A new Cuban joint is open on Madison, across the street from the Brass Door and in the former home of the Little Shop of Sandwiches. 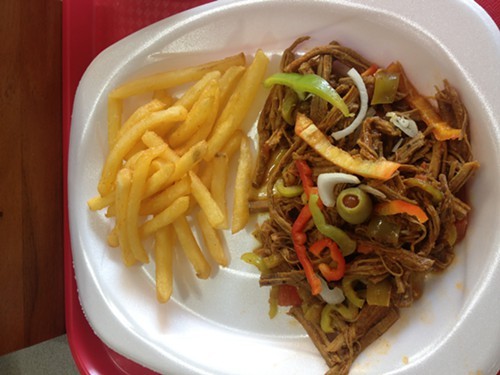 The space is indeed a little shop, even if the former proprietor has moved on. Order at the counter, and you'll turn around to a tiny eating area, packed with small tables and about twelve seats, including a few bar stools tucked under the counters lining the walls. There is a pair of small sidewalk tables out front as well, but generally, if you don't catch them before the lunch rush, you can expect to take your food to go.

Havana's Pilón is named for a Latin American/Caribbean expression meaning mortar and pestle, a few examples of which are stacked around the restaurant as decoration. The menu is small, a pared down selection of Cuban standards such as Ropa Vieja, Spanish for "old clothes," a savory dish of shredded beef in a tomato sauce; Mofongo, fried plantains mashed with garlic in a pilón and topped with shrimp; and, yes, the Cuban sandwich, a grilled stack of ham, pork, Swiss cheese, mustard, and pickles.

They're open from 7 a.m. to 7 p.m. every day, and offer breakfast items like ham and cheese croissants and tostadas.