Hannah let me tag along when she went to Olive Branch last week to check out Jonathan Mah's SideStreet Burgers for this week's Food News column.

I can say we both left impressed. This is a one-man operation with a bare-bones kitchen. The menu is spare by necessity but the offerings, particularly the specials, are smart, forward-thinking.

Exhibit A: the special of the day, which Hannah ordered: The Chinese BBQ Pork sandwich, a Banh mi-inspired creation dressed with cucumbers and cilantro and served on French bread. 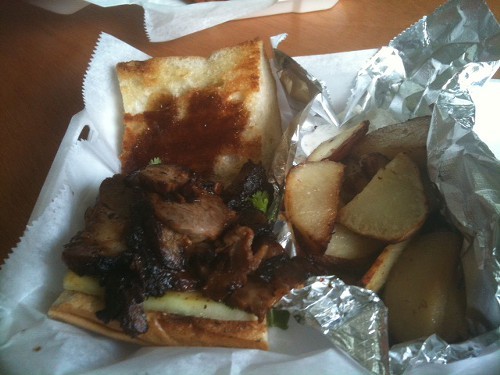 Exhibit B: the Irish Car Bomb bread pudding. This rich-beyond-belief treat was a reality check of sorts. This bread pudding gets the texture just right, which — yes! — is pudding-like. All those very good variations I've had over the years now seem lumpy in comparison. 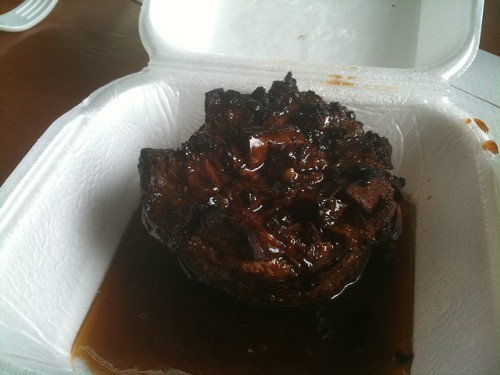 Regular menu items include the 1/2 pound Sidestreet burger and a turkey burger ($2-$4) and individual-sized pizzas ($4-$8). Specials making frequent cameos include the Hott Pigg, ground pork stuffed with bacon and rosemary dressed with BBQ sauce, slaw, and pepperjack cheese, and a turkey-spinach burger.

Hannah mentioned it in her column, but it should be repeated: If, when, you plan to visit SideStreet Burgers, go to an ATM first. This is a cash-only operation.