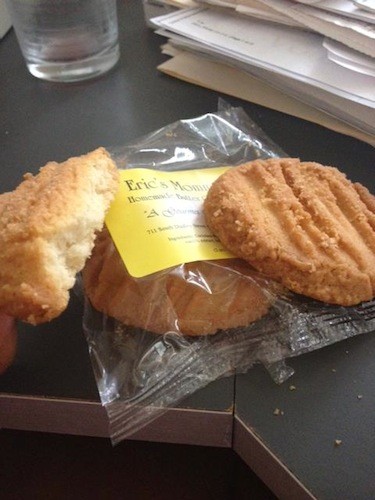 If you've been to a corner store around these parts, then certainly you've seen Eric's Momma Homemade Butter Cookies.

The "Eric" of Eric's Momma cookies is Eric Davis. He says his mother used to sell the cookies at church and sell so many that he decided to launch a business. Eric's mother, who has since passed away, wasn't interested in the venture, so Eric, using her recipe for butter cookies, started the company with a partner in 2006.

"We started going store to store," says Davis, "and it took off."

According to Davis, the company has a bakery in Midtown that employs three workers who make and package the cookies. They make roughly 1,500 to 2,000 cookies a day.

Davis says that Eric's Momma has stuck to the corner stores because the difficulty in dealing with the multiple channels of larger, chain stores.

"It's easier with mom-and-pops," Davis says. "You walk in the store, and chances are, you're talking to the owner right there."

You can find Eric's Momma cookies at Roxie's Grocery (520 N. Third), the Hop-in at Poplar and McLean, and many other locations.