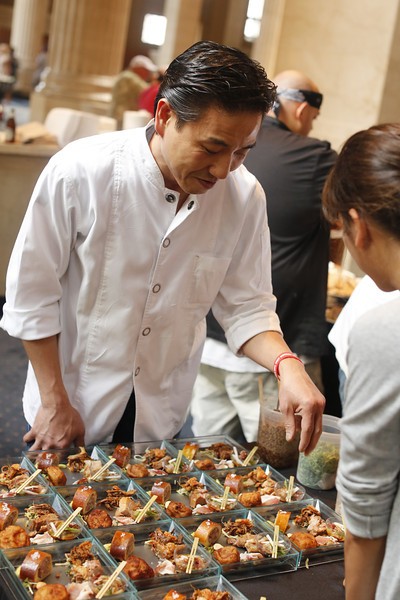 Cochon 555, which puts on a series of culinary events across the nation to promote heritage breed pigs, has been releasing details over the last month on this year's Heritage BBQ.

Heritage BBQ debuted in Memphis last year over the Labor Day weekend. The three-day, multi-venue event included an outside "fire kitchen," a market, a pop-up barbecue restaurant, seminars, dinners, a run, and the main event — a competition pitting top chefs against each other in creating dishes using the whole hog.

First, the event is expanding to Louisville and St. Louis. Second, what was once a three-day bacchanalia has been sharply focused into one event, the competition.

Competing in Memphis this year are:

Those coming in to compete are Travis Grimes of Husk Restaurant in Charleston; Michael Scelfo of Alden & Harlow in Boston; and Chad Clevenger and Nick McCormick of Alma Cocina and Tap gastropub in Atlanta.

From the press release describing the competition:

Each chef crew must prepare one plate showcasing the whole hog in six distinct dishes comprised of four meats and two sides. The meats are BONE, MUSCLE, PULL, STEW, and sides are MAYO and MUSTARD. The winner of Cochon Heritage BBQ receives $1,500 to donate to a charity or farm of their choosing, a stash of Cochon specially selected cask-strength Four Roses Bourbon, a keg of Cochon Edition "BBQ King" from Anchor Brewing and a CVap Pod from Winston Industries.

Guests can try samples from competing chefs. There will be oysters as well and plenty to drink. A pop-up butcher shop will also be on-site.

For more information, go to cochon555.com.