These two very different people came together for one reason: to see who could make 50 turkey "sammiches" the fastest, with the sandwiches going to Manna House, which serves the homeless.

The competition took place at the Center for Southern Folkore, where Jason, Wendi, and her two teammates prepared the fixings for their turkey sandwiches. The ingredients were donated by Cash Saver Cost Plus Food Outlet, and Bluff City Coffee. 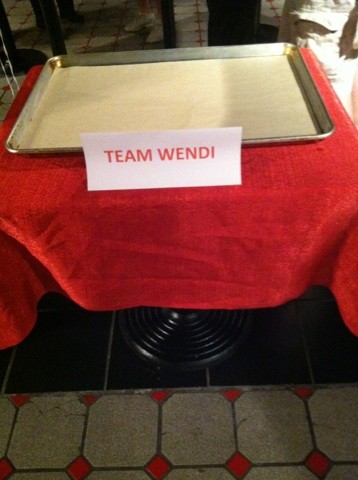 There were a few pre-sandwich fixing stretches...

... and a nerve-wracking countdown.

Thomas and her team quickly took the lead, leaving Chef Jason with some catching up to do.

However, Jason, at right, quickly caught up and the two teams were neck and neck as they put the finishing touches on their sandwiches.

Despite the extremely close call, Wendi Thomas and her two teammates were declared the victors with a time of 5 minutes and 19 seconds.

Once the winner was announced, Chef Jason discussed the possibility of making this competition expand into more of a restaurant competition. Or possibly even expanding to neighborhoods competing against one another.