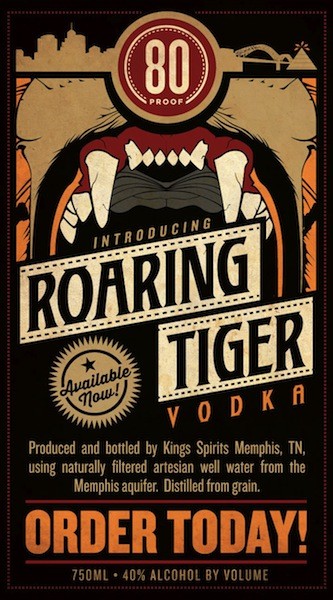 Ryan Hanson and Matthew Brown, the brains behind the new Memphis-based vodka Roaring Tiger, are longtime friends who came to the vodka trade via beer brewing.

"The secret is the water," says Hanson of Roaring Tiger, explaining that he and Brown recognized early on that Memphis has a real asset in its water, one with great potential in the beverage industry.

Hanson says the pair studied the industry, looked at what other distilleries were doing ... and then they put the project aside for a few years before picking it back up two years ago.

The base for Roaring Tiger is made by another distillery, and then sent, at 180 proof, to Roaring Tiger's headquarters near the Wiseacre brewery in Binghampton. The vodka is then filtered and the water added to create an 80 proof vodka.

"It's the key to giving Roaring Tiger a smooth texture," says Hanson of the process.

Hanson and Brown rolled out the vodka for a trial run during this year's Goner Fest in order to determine any wrinkles. The vodka hit area liquor stores — Buster's, Joe's, the Spirits Shoppe, the Corkscrew, among them — in mid-November. (It's $19.95 for 750 ml.) Specialty cocktails made with Roaring Tiger are served at Bari, Mollie Fontaine, Cafe 1912, and Lynchburg Legends. The vodka is also served at the Hi-Tone and Murphy's.

As for the name, Hanson says they put a lot of thought into it before settling on Roaring Tiger. "We're huge Memphis Tigers fans. It really got to what our product is about."