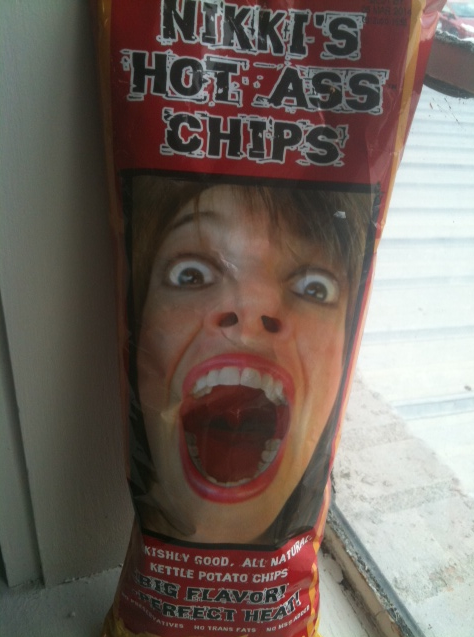 Nikki Schroeder, the woman behind Nikki's Hot Ass Seasoning and the newly released Nikki's Hot Ass Chips, says that while she's had no formal culinary training, she is a prolific home cook. She created a go-to seasoning that she would make in big batches, and friends would ask, "Why don't you bottle your hot-ass seasoning?"

Two-and-half years ago, Schroeder did just that, placing the seasoning in stores such as Miss Cordelia's and Whole Foods. In late November, she introduced the latest in the Hot Ass line, seasoned kettle chips. You'll find them at Miss Cordelia's and soon at City Market and area Bass Pro stores.

Whole Foods declined to carry the chips, citing concerns about the packaging.

In an email exchange between Schroeder and the Whole Foods buyer based in company's South region office in Georgia, the buyer wrote that the name may be offensive to some customers, suggesting that the packaging would have to be changed before it would be approved.

According to Schroeder the brand's audacious name and design (that's Schroeder's mug on the bag) has been one of the biggest draws for the Hot Ass line.

"We never anticipated a problem," says Schroeder, who notes that it would be too expensive to change the packaging.

Schroeder says that she's disappointed about the decision. A post asking for customers to contact the Whole Foods manager is up on the Hot Ass Facebook page.

Whole Foods does not have a specific policy on potentially offensive language on packaging.

According to a Whole Foods rep, the decision to not carry the chips was simply a "judgment call," noting that seasoning package design is different with smaller lettering and the "Hot Ass" on the back.

Meanwhile Schroeder is busy getting the chips into retailers and developing her next product, a bloody Mary mix.