New York City baker, Dominique Ansel, ignited a craze over his croissant-donut fusion this past May, which the chef trademarked the “Cronut.”

With people willing to wait in line for hours and scalpers selling the baked good like a pair of Yankees tickets, Ansel’s sweet treat received enough hype to warrant TIME Magazine to list the Cronut as one of The 25 Best Inventions of the Year 2013.

Due to the trademark, legally speaking the Cronut only exists in New York, but that has not dissuaded cooks throughout the world from trying to master their own versions of the pastry crossover, including one local Mid-South business.

Rick Brenneman and his wife Jennifer purchased the Donut Hutt (formerly Oh Susanna’s) in Collierville this past summer and began to sell the croissant-donut, "Croughnut," the first of this year.

“Whether it is an imitation of the real thing or a facsimile,” he said. “Just like the first person that ever made lasagna, it follows suit. After a while everybody starts making it and putting their own take on it, their own little twist.” 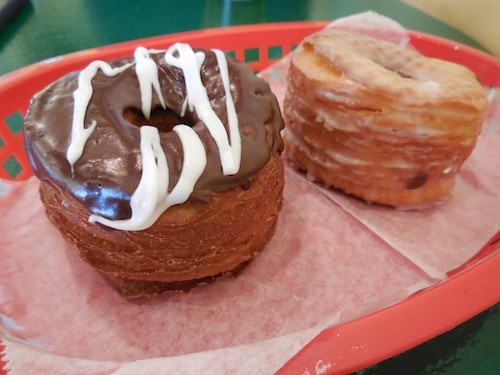 The donut hybrid sells out every week and Brenneman said people have called the Donut Hutt from 45 minutes away and asked him to save a few. Besides the taste, Brenneman said he attributes the pastry’s popularity to its mystique.

A mystique created by the multi-day preparation and baking process, which makes them both a challenge to perfect and a scarce commodity to find.

Offered only on Saturdays, Brenneman bakes two to three dozen of the croissant-donuts, which are sold for $2.75 and limited two per customer. Flavors include: glazed, caramel chocolate, and chocolate with ultra light pastry crème.

“It takes me about the same amount of time to make those (croissant-donuts) as I can make probably 40 dozen donuts,” Brenneman said. “It’s time consuming and they tend to be a little temperamental so it takes all of my concentration to get them done.”

Local Collierville resident, Jessica Ballard, a regular at the bakery, said she had never heard of a croissant-donut prior to seeing them in the Donut Hutt, but after trying one, said they were “absolutely delicious.”

“It is very different from your average donut and it is just very rich and has lots of flavor,” she said. “The mix of the dough and the pastry, I mean it’s just awesome.”

With a distinct crunch on the outside and unmistakable moistness on the inside, it is hard to resist eating this breakfast delicacy layer-by-doughy-layer.

“Rarely do you come into a donut shop and leave mad,” Brenneman said. “That is a wonderful thing about this business.”