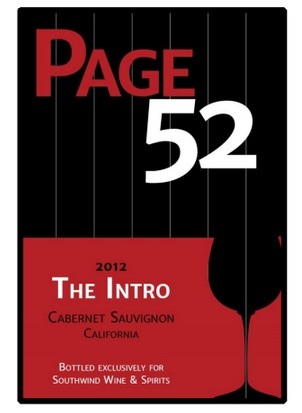 Southwind Wine & Spirits will introduce its new exclusive-to-the-store wine Page 52 at a dinner at Elfo's on Monday, February 17th, at 6:30 p.m.

The Page 52 lineup includes a Chardonnay, a Cabernet Sauvignon, and a Pinot Noir. The wine line's name is a mashup. The "Page" is for Southwind's owners' family name, and "52" is a nod at the store's slogan of "Home of the 52-week sale."

According to Ryan Gill, general manager of Southwind Wine & Spirits, the idea for Page 52 came during a trip to California wine country. Gill, owner Mark Page and his wife, 3 Finger Wine Company sales manager Tom Doran, and winemaker Michael Loykasek were tasting wines, when an unlabeled bottle of Pinot Noir was brought out.

Per Gill, "They told us that they'd just taken it straight from the barrel and that they didn't even know what they were going to do with it yet. Since it was a small production, we asked if we could buy it all on the spot. They agreed, and then we started really talking about the possibilities. They said they could find us a Chardonnay and a Cabernet for around the same price and production, and thus Page 52 was born."

The Chardonnay is described as featuring flavors of Bartlett pear, green apple, and Meyer lemon; the Cabernet Sauvignon as "chock full" of flavors of Bing cherry, black currant, baking spices, and sweet oak; the Pinot Noir with flavors of raspberry, cherry, and strawberry as well as savory spices and shaved truffle, with a finish of toasted coconut, vanilla, and "a dash of sassafras."