A Visit to Lost Pizza Co. 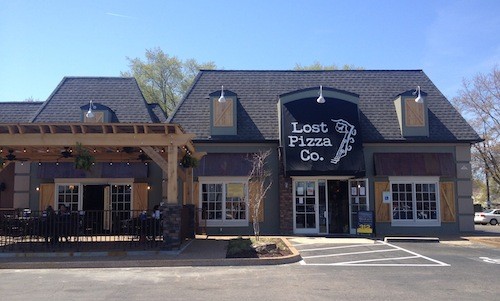 The new location at the corner of Poplar and Humes has a spacious interior with a mishmash of Mississippi Delta-themed mementos hanging from the walls and ceiling, from a collage of old Mississippi license plates on one wall the restaurant to half of a Volkswagen bus mounted on another. They also have a small, covered patio with fans in the front of the building.

The menu at Lost Pizza Co. includes a list of signature pizzas, subs, salads, pasta dishes, and an assortment of starters, including wings, locally made tamales, and chips and queso. Lost Pizza Co. also gives customers the option of creating their own pizza masterpieces. Create-your-own pizzas begin at $4.99 for an individual pie (about eight inches) with cheese and sauce (your choice of marinara, alfredo, or salsa!) plus $1 or $2 per topping.

My aunt and I met for a weekday lunch at Lost Pizza Co. When I arrived at noon, the place was empty except for one table with two lone diners, but the patio filled up quickly over the next half-hour.

Both of us had ours made on the thick crust, which was a good base for the load of toppings on our pizzas. The thin crust I saw other customers eating looked similar to Memphis Pizza Café’s pies. Both of us were very pleased with our pizzas. The crust was delicious, and the toppings tasted fresh.

The pizzas at Lost Pizza Co. are priced more modestly than the pies at some of the other pizza joints that have recently opened in East Memphis, and the food is really good. They have happy hour Monday through Friday from 3-6 p.m. with a lineup of local beers on tap.

A note for vegetarians: Lost Pizza Co. doesn’t have many meatless menu items. The Happy Hippy is the only vegetarian signature pizza, and all of the subs have meat. I asked to substitute mushrooms for the chicken on one of the specialty pizzas and was told that they don’t do substitutions on the specialty pies. So, unless you create your own pizza, the only other entrée options for veggies are the baked spaghetti or a salad.