A Visit to Nacho's 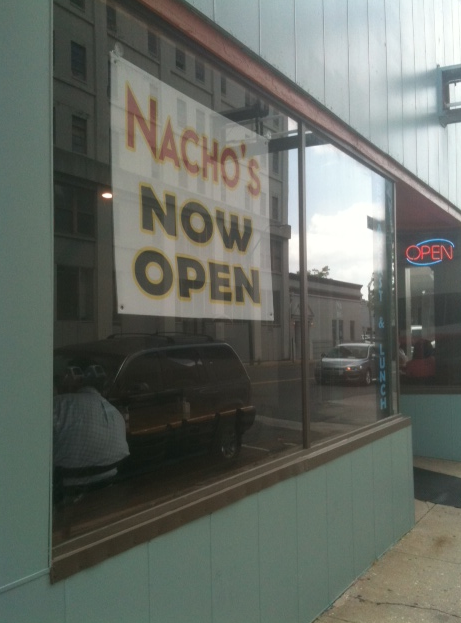 Last week I stopped by Nacho's downtown on Jefferson to check it out, and while it was straight-up noon, there was plenty of metered parking nearby.

The place, which serves breakfast and lunch weekdays, is small but not teeny-tiny. There are 20 or so tables, from two-tops on up. It was about a third full on my visit, and on that day, front of the house was a one-man operation, with literally one man taking orders and acting as waiter and cashier. Given the situation, the mood might have been hectic, but it was quite upbeat.

There are, in fact, nachos at Nacho's. I ordered the Grilled Nachos ($9.99). This usually comes with a choice of steak, chicken, a mix of chicken or steak, or shrimp. I stuck with just the veggies— grilled onions, peppers, and mushrooms— topped in a very good mild cheese dip. I think the addition of a heap of well-seasoned black beans would put this dish over the top. 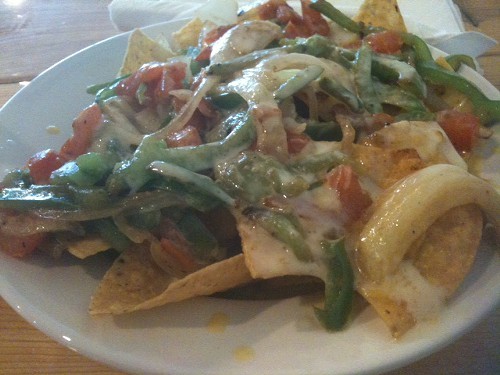 The menu also features a fine selection of sandwiches and wraps — the intriguing Ninja sandwich (with turkey, roast beef, swiss with Teriyaki sauce and sprouts, among the ingredients) and the Fireball of Freedom wrap (turkey, roast beef, bacon, plus more topped with a habanero sauce.

Nacho's also serves Bi Bim Bop, which plenty of folks were ordering on the day I was there. On the breakfast menu, there's the Korean Omelet Plate, with fried rice and your choice of beef, chicken, or vegetables.